Allow me to shatter your old Beliefs and challenge you to question every single thing you’ve learnt and known throughout your life.

You must be questioning yourself on the events taking place in recent times. Pope Francis making some radical changes. And with the current statement by Tan Sri Tengku Razaleigh, a veteran Umno leader, lambasting the bigot Perkasa movement. And even more recently, Malaysian journalists already voicing out their demands for a Free Malaysian Press. Elsewhere in the world, scores of revolutions are taking place.

You must be asking, “Wow! What in the Heavens is going on??” Six years ago, such things would never have been possible.

Then, everyone believed that the Life they were in, was ruled because of a Fear driven System. And it was a never ending cycle of boredom and thirst for wealth and happiness.

Welcome to the Time of Awakening. The Sathya Yuga as the Hindu puts it. The Golden Age as the Mayans prophesied. The Second Coming of Jesus Christ as the Christian Faith puts it. Of course, it is not Jesus who comes down again or takes a rebirth.

Nor does Prema Sai, the apparent third re-incarnation of my Master, Sai Baba.

But the birth of our real True Selves.

We have always been the Second Coming, the Prema Sai, the Imam Mahdi. The Truth has been staring right at us; that all the Spiritual texts and religions had always led to one thing and one thing only; that the supposed Judgement Day and End of the World, was but that moment in our lives when we remember we had always been the One we have been waiting for. The very same we have been seeking and questioning.

Let me tell you, it has a beautiful Domino effect. One person Enlightened, Awakens ten more. From ten more, hundreds more become Enlightened and then thousands and millions and billions.

Nope. Those were practises. Just like Mathematics and Essay Writing. The more one practices, the more one becomes One with the subject. The more one Masters it.

So, in this context, the subject has always been about God and the Mysteries of Life.

Indirectly (or directly), it has been about You. Yes, You are God and there is nothing to be afraid about this fact. In fact, it’s a humbling fact.

Have you ever questioned why did an all angry God cast away Adam and Eve out from the Garden of Eden? Why would God, an all merciful, loving Entity do such a thing as this over an apple? What would you really and truly do as God?

I would say, “You know what Adam, fuck the apple. I’m going to make more and you two enjoy. Want some apple pie, fellas?”

What if, Adam and Eve never existed. What if, in the end, it was but a metaphorical story created to make people at that time, with limited intellectual capabilities, to understand their True Selves. What if Darwin’s theory of Evolution, is put into a more Holistic and Spiritual context?

That, each passing Moment, we’re evolving through our Mind and Soul rather than the body.

If one looks at this fact from the top view, one would see a beautiful fractal image / symbol. And that was how symbolism was born in the Ancient Pagan cultures. The symbols created and made were seemingly complicated to comprehend that men at that time decided to worship them.

It was but a blue print of our Real True Selves.

The Great Masters of that time, Jesus and Prophet Muhammad (PBUH) were trying their best to tell mankind to not take the symbols and statue worshipping seriously but try looking at it from a different context. From outside the box. Of course, men, again, at that time were intellectually inept, and so they took their words literally. They thought worshipping stones and statues were wrong.

They were not wrong. They never were. But Jesus and the Prophet came up with an even better, disciplined and mature way to get to know our real True Selves.

Every symbol is a blue print of our Selves. The Tao, the Sri Yantra. You can consider these symbols to be hints to discover our true Selves.

To understand one’s True Nature, one has to hold the reigns of one’s Mind, like Krishna does in the Bhagavath Geeta.

The image of Krishna (your True Self) holding to the reigns of the Mind (represented by five horses, the five elements) with Arjuna at the back shooting arrows at his enemies (the enemies, in this context, our own Fear) with confidence, representing the body, is one of the most profound Enlightening image if one is able to grasp what the image is trying to depict.

So who are You?

Celebrate the Oneness in this beautiful, loving Fact.

But most importantly, Wake Up! 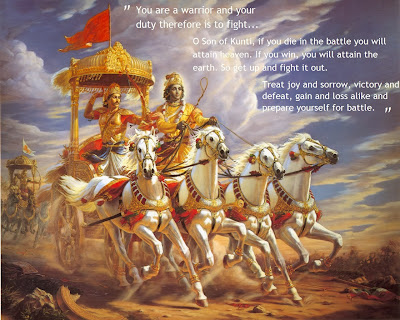