There are many types of women on Facebook and they’re all broken into different categories depending on their mode of behaviour. And after 2 and the half years of observing almost each one of them, I have come up with a thesis (kind of) report.

The fakers are the easiest ones to spot. They are the ones who would put celebrities photos as their primary pics eventhough Facebook has warned us not to use photos of celebrities. Despite that, you got to give them credit for having the balls (or pussy in this pretext) to actually post a photo of Aishwarya Rai as their primary pic. This disease is extremely common in Indian/Punjabi girls.

These ones are the ones who have the most Self Praised Artistic shots of themselves. And usually they pose outrageously dramatic and most of the time, they don’t look as good as they look in the pictures in real life. Call them photogenic or whatever, but in real life, they’re the biggest bunch of losers you can ever meet. You can put them in The Fakers category too but the thing is, they don’t and never put a photo of a celebrity as their main primary pic. Owh maybe a photo of Edward Cullen or Salman Khan (these days Shahid Kapoor) tucked somewhere in the Wall Photos section but never a photo of female celebrities.

These ones are the most annoying of the lot. Not only do they think they’re pretty, they also think that they’re smart and everyone else is stupid. They think whatever they say is the word of God and everyone has to believe it regardless of how dumb it is. They’re the ones who stereotype man and believe that all men are creatures waiting to break every girls heart. They have gone through 20 bad breakups in order to qualify that they know everything about life.

These are the second most annoying ones. You can easily identify them through their emo status messages. “I didn’t get to spend Valentine’s with my baby. Life sucks!” or “He didn’t  talk to me, wat did I do to you??” or the more straight to the point, “Life in the end fucks us all. Life sucks!” They’re so full of shit that at times you feel like hitting them with a dirty sock smack right on the head. They hate their parents and siblings, hate themselves, hate everyone else. They also go through mood swings. Today she would say, “My boyfriend didn’t call me today. I hate you! I’m leaving it to God” and the next day she would say, “Yay! He called today! I loooooooove him soooo much!!” If one ever comes up to you and tells you that she wants to commit suicide, please tell her to go ahead. The world will be a better place.

6. The Good For Nothings

Okay these ones aren’t that annoying but it can get annoying when they beg you to send them Love so that their stupid Love Meter fills up. Or they beg you to send them back Pillow Fights because they’re dying to collect the various kinds of pillows on Facebook. Other than that, they can be quite entertaining because they’re the ones who would join 25 fan pages of things that you might be doing or have done such as “I’m a Bathroom Singer”

The Zombies are the ones who have Facebook accounts but you never ever get to see them updating their status messages or using Facebook. Infact, at times you wonder to yourself on why they ever have Facebook in the first place if they’ve never updated it for a year and a half.

8. The Attention Cravers (The Snobs)

These ones are the most hypocritical type of women you can ever encounter on Facebook. They complain when someone sends them a Facebook request. Or if that someone tells them thank you for approving the friend request. They complain because they don’t know the person but still added him (just because he’s cute) They complain and make a fuss about alot of unnecessary things. They post photos of themselves with a caption, “Oh Gosh! I’m fat!” or “Omg! I’m getting dark!” They think it’s the end of the world if someone claim that they’re fat. Even worst, their Vain Hormones kick in if someone say they’re cute. The best way to deal with these kind of women is to pretend that they don’t exist. Sit back and watch the fun as they try to get your attention so that you comment on their pictures.

You have to watch your words, thoughts and action when you’re with this one. The slightest thing you say or do can make them majorly insulted or depressed that they would hate you for the rest of their lives. But on the bright side, they would delete you from their Friend List and would leave you alone. Which is really good because you don’t need to stand and listen to the shit they say whenever you accidently get them offended.

This one applies to the 13 to 16 year olds who are on Facebook. They behave, talk and pose like adults. You will never know they’re 14 year olds until you ask them but from the pictures they pose in, they pose as though they’re 25 year olds. An advice: Act your age. 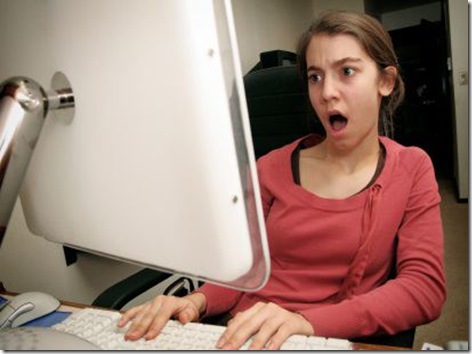