Okay, so now that I’ve written a post about the Types of Women on Facebook, it’s fair to write one about their counterparts, the Men.

Due to popular demand (and after lots of back lashing and tongue lashing) I also observed a few men (rather hesitantly) on Facebook and below are the 10 types that you have/will encounter in your stint at Facebook.

Imagine Donald Trump with a Facebook account. He advertises all of his strong points on Facebook so much so that the 15 times 15 table seems like a piece of cake compared to the information he’s sharing. There’s so much he’s doing, from graphic designs, to music, to writing, to videos, to meeting people, to clubbing, to events, to parties etc. He meets celebrities, he meets big shot people from the government, he meets political candidates, he meets political candidate’s mother, etc etc. His profile is definitely the High Profile. He would be the one who would message you on Facebook chat at 4 in the morning asking you if you want to try out a new business venture with him. And he would also gladly tag you in every music video, youtube video, note, event, photo that he uploads.

Girls would die for Salman Khan. Well most of them would. And this guy is smart. He has no good looks but he knows what girls die for. The body! So he’s the one who regularly attends the gym but skips classes and work to beef up his body and then uploads tons of his body building pictures on Facebook. And then, if he’s lucky, he gets a stint to appear at one of those body building magazines which hardly anyone reads except for gays and homosexuals and poses for a photo which appear as tiny as the Facebook thumbnail. And yes, he scans the page and uploads it on Facebook as well. You will also meet him at 4 in the morning. He would tell you that you have lost/gain weight and he’s ready to be your personal trainer. Free of charge ofcourse.

This dude loves roleplaying. He loves roleplaying so much that he never gets tired of the Farmville games, or the Mafia Wars games or the Fihsville, Catville, Forgetmenotville and the Get A Frigginglive Ville games. He plays every single game there is on Facebook. He knows every single game there is on Facebook and most of the time, he’s always the top scorer among your friend list in any game. Gaming is cool. But it’s not cool when you game on Facebook. I don’t know why, maybe games on Facebook aren’t violent enough. Or maybe because they don’t require high end graphic cards. Yeah maybe…

Ever seen a dog chasing a car? Ever seen how it’s tongue protrudes out while the saliva spills all over the tar road? Picture that, except replace the car with a hot chic and replace the dog with a desperate horny dude. That’s exactly what you see when you go through some girl’s pictures. They comment the weirdest things at the wrong times all for the sake of landing that girl. They say stupid things like, “Wow babe! U dun luk sweet but lovely” What the fudge does “You dun luk sweet but lovely mean?” It’s like saying, “Wow you don’t look good in black but look good in dark colors” That’s how dumb it is. They make the word Desperado sound uncool anymore. And by the way, Desperado is a must watch movie.

This dude, he gives a full fledge detail about his life 24/7. “I’m going to work now” “I’m having lunch now” “Owhhh I saw pigeons at the park today!” “Owhh it’s raining” He gives you a full detail about his life forgetting that Facebook is not an online diary but a social site where people meet people. Maybe he should work at the news department or something. I fall in this category by the way. My Latest Twitter Update: “I’m now writing the Type of Men on Facebook”

These particular bunch of guys only come on Facebook for one reason and ONLY one reason. Remember seeing that little app where it has a photo of a sad cloud if you’re sad and a photo of a smiling sun if you’re happy? That’s what they do. They come online just to update that particular app. “So and so is feeling sad today” “So and so is HAPPIIIEEE!!” I wish they had an app for those who feel fucked up when they see all the shit they update.

For these dudes, life is one big party. They party from dawn till dusk. Dusk till dawn. Ecstasy pills, beer bongs, dildos, you name it. They have it. For them, life is an open field. All you got to do is set up a huge tent, get some beer suppliers, some chairs, a bucket of ice cubes and they’re set for the Noah’s Ark. Best part, they update their Facebook status about it, upload pics about it and send you notifications and messages about the events that will/have/are taking place at the moment. They’re a cool bunch of dudes. It’s just that they’re not so good in telling the time.

Okay, here’s the irony of everything in life. For a good man, he has to sweet talk a girl, give her flowers, take her to the movies, call her everyday in order to get her to ATLEAST start liking you. But for the good looking dude, all he has to do is upload a photo of his good looking self (most  of the time in his Nissan Skyline or in a black tux) and girls would be lining up at his door. He’s also the guy who’s least active on Facebook. Remember this, a dude who’s least active on Facebook doesn’t mean he’s not active. He’s like a tiger laying low waiting to pounce on his victims 😉

The dudes, are the special bunch of people. These are the bunch of average joes who sit at the cyber cafes before/after a game of Call of Duty Modern Warfare, they would flick or go through profiles of hot babes and just admire from a distance. They would think a gazillion times if they should add one that actually catches their eye. The problem is, almost all of the chics catches their eyes. So by the time it comes to making a decision, they prefer spending their time killing some terrorists on an Online Game. Life is beautiful for them. God bless them *sob*

If there was a religion called Facebookism, these people are the prophets and the Mesiahs. If Facebook is turned into a political organisation, these people would be one of those top leaders in the organisation. Reason: They’re jobless, lifeless and lead a life of a bat (sleeping in the day and living in the night) They’re also people who think they know everything about the world around them that they prefer to make fun about it by writing notes on Facebook and tagging everyone else they know. They would tag their cousins, the cousin’s friends, cousin’s friend’s friend, their aunts, uncles and nieces and nephews. Just so that people find them deeply amusing. Am I in this category??…. NAHHH! 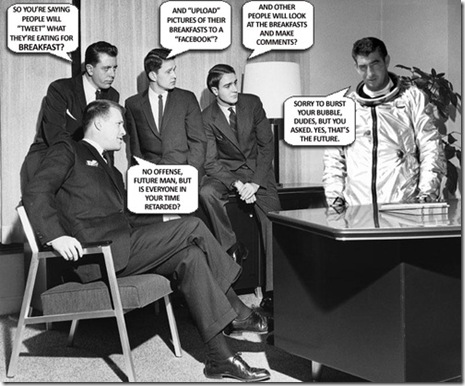