Almost the whole of my childhood was actually spent either in the hall or in my room playing with my toy soldiers and toy dinosaurs. I also had this set of zoo animals (along with the cages) and I used to play them from day to night when I had nothing to do.

I used to imagine storylines and made my own sound effects and dialogues when I played the toys. It was fun but when you think back again, it sounds kiddish. But that was my only form of solace. The only place I vented out my frustration, fury, anger and even happiness.

Mum was cleaning the store room yesterday and she took out this huge red basket which had tons of my old toys inside.

It brought back good old memories.

There was once, I was so crazy about the zoo animal toys. They were cheap back then and the toy shops used to sell them in plastic bags. They used to cost around RM 5 to RM 10 and it was one of my favorites. Reason was because of the elephant figurine. I loved the elephant figurines alot. I had around 20 or so of such similar figurines ranging from different sizes and colors. 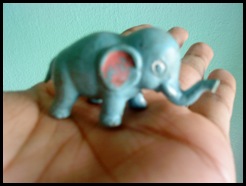 Dumbo, one of my favorite elephant figurines

I had many toy figurines and most of them were toy soldiers, zoo animals and dinosaurs. But the weird thing about the Dinosaur toys were that, they didn’t really look like Dinosaurs. More like weird monsters from some B Grade horror movie. Below are some examples: 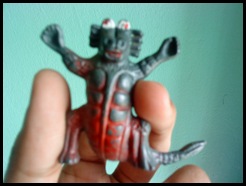 I used to be afraid of her and each time i had one of my “sessions”, i always made her the villain. I don’t know if she’s a she or he. But judging from her hair, she reminds me of an evil maid who just slaughtered someone in the kitchen. 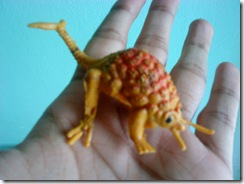 What on earth is this thing?? I have no idea. It looks like a scorpion with a very bad rash. I had a few of these critters so they always play the role of the Evil Dinosaur Witch’s menacing pets. 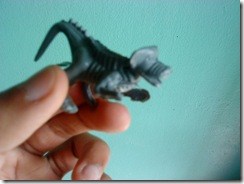 When I had the mood, they used to play the good guys. The ones that can fly and bark. And if my mood was bad, i’ll cast them as the vile hunting dogs that torment the hero in the night. 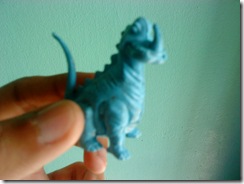 The Dog with Horn err Dinosaur

I don’t know if this is a dog or a rhinoceros. It looks like a mixture of both. I usually play this guy as the hero’s pet. The stupid dumb pet.

I also had these war vehicles and some of them never even existed (I think). Take for this for example: 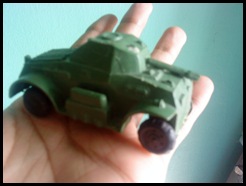 Back in 1998, Bill Clinton launched an air assault on Iraq. It was awesome seeing the news, how rockets fell on Baghdad. So i used to play my own version of the Second Gulf War (way before the time when the actual Second Gulf War happened). 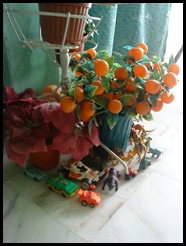 Owh and by the way, mum actually took out some of the toys and had this sudden wave of inspiration. She decided to place the toys around her flowers in the hall. Some of the toys are now donning the TV set. Some are staring at me from the dressing table. They’re everywhere.

Will I throw or give them away? Hell no! I’m keeping them 🙂