I came back home yesterday and was fooling around with Lessy when she laid on her back (it’s a sign she wants me to scratch her tummy. She loves it when I do that). I scratched her tummy and realised there was a weird lump at the bottom right of her tummy (just above her groin)

It felt like someone shoved a bar of soap into her tummy. It was hard and it felt weird cuz her tummy’s soft but when you touch that part, it’s hard.

But the weird part is that, she doesn’t seem to be in pain. Because if she was in some sort of pain, she’ll be quiet and less active.

But she seemed fine.

I told my parents about it and they were not really bothered about it. My dad said it’s the “birth sack” because she’s a virgin, so she didn’t have any babies and because of that, there’s a lump.

Was supposed to take her to the vet today but mum made a fuss about it because apparently it’s gonna cost alot (yes it would but we have the money!). I told her this but she started kicking a fuss and we fought.

I hate it when this happens.

I mean, c’mon, Lessy’s part of the family! She’s not well and God knows what that lump is.

Navin said it could be a tumor. I freaked out.

But she seemed to be passing her motion fine (but her urine’s dark yellow) but she seems to be in no pain at all.

But I’m glad Bala’s loaning me some cash. Maybe I’ll take her to the vets tomorrow. 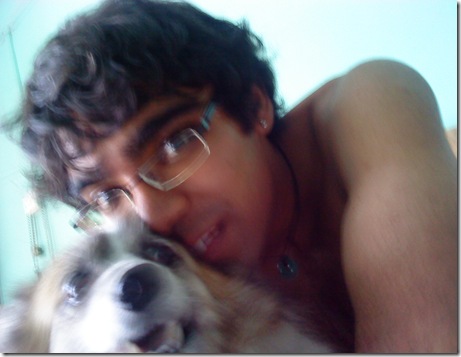 My Best Buddy and Me

But despite that we managed to snap some pics of us together and based on the pic above, you can really see she’s fine.

I need to spend more time on her. Realised I’ve not been spending much time with her before.