The writer sat alone in his room.

The only source of light was a candle. He sat facing his typewriter, rapidly tapping away. What could he be writing? What could he be pouring into that old paper? What thoughts and what stories? The writer continued typing away.

Probably a story about the little “gifts” that were hanging on his walls. Gifts which represented his friends symbolised in their own unique way.

There was this one painting that hung on one of the walls of the writer’s house. A painting that was randomly painted but with organised and rash brush strokes. The painting was courtesy of his friend, who was an artist.

Next to that frame, a Tamboora; an Indian drumming instrument) sat comfortably in its glass-made frame. The Tamboora, despite being not played in years, still retained its skin’s strength and firmness. That instrument was courtesy of his musician friend.

Right next to it lay many other frames, each with an object in it. The objects, though random, represented symbols of friendship and love between the writer and his friends.

The writer kept writing steadily and when he finishes his last piece, he rereads the story again. After a few minutes, feeling satisfied, he stretches and smiles. Feeling satisfied and contented, he opens the curtains of his window, letting in the cold evening breeze in and the warm sunlight to light up his once dark room.

He lights a cigarette and enjoys the rest of the evening.

Years later, when the writer passed on, there was another additional frame placed next to the plethora of other frames. A frame containing a book, the very same the writer wrote. Comfortably placed, the book was a thin paperback, with a photo of all the frames in his house walls as its cover.

The book was titled, “The Writer and His Friends”. 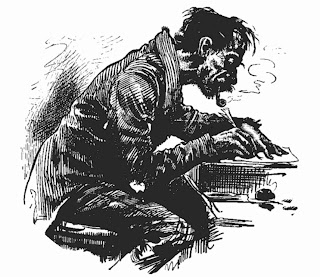