It was early October of 1943 when we first heard the distant roars of a creature in the forest next to our village in Kuala Pilah. At first the roars seemed natural. They were heard very rarely, leading no one really to care about it much as our village, like any other village, was close to the forest. Sounds of animals and beast was common. And then, as time went by, we started hearing the roars frequently in the nights. Sometimes, they sounded distant. And at times close. Mother would hug us tight whenever we heard the roars. Whatever it was, it sounded hungry, frustrated and angry at the same time. The roar, sounded like an annoyed giant yawning. A very prolonged sound, one that can only be emitted by a huge beast. It sounded like it was calling for something. Or maybe it was sending out a warning.

In the mornings, when we walked to school, no one would speak about it. Grandfather, who used to smoke on his pipe every evenings at our wooden porch, stopped doing so. And once, over dinner, when I asked father what it was that roared and struck fear into our hearts, father looked at us sternly, and ordered us to eat silently.

The beast, I believe, was playing a very shrewd psychological game with all of us. It was as though, it was daring us to venture into the forest and see it for ourselves. No one ventured in ofcourse.

But it ventured into our territory one night.

It rained when it struck. We heard the goats below our Kampong house bleating when it clawed three of them, bit two at the necks and dragged four into the forest. I could clearly remember mother’s fearful eyes, as she placed her fingers on my lips, motioning me not to make a single noise as the creature pounced and killed our goats below us.

The following days, the disaster was voiced out during one of the village’s weekly meetings. Our village head, Tok Mat, instructed every men in the village to build wooden fences around the village perimeter. It took us two weeks to complete a task, which could have been completed within four days by the 40 strong young men in the village.

The reason? The creature struck again. This time during the evening prayers. It managed to find a gap between one of the unfinished fences, walked silently onto the wooden stairs of the unfortunate villager’s house, entered the living room and pounced on an infant, dragging the newborn out into the forest. No one knew it attacked. The mother of the baby was busy cooking while the father prayed in his room. The creature, was a stealthy shrewd hunter.

And fear, that was its tool.

The men proceeded to quickly build the fence. That night, Tok Mat had two groups of five men holding torches to go out to patrol the unfinished areas in turns.

The next morning, while we were on the way to school, we found one dead body of a villager, and my neighbour’s father, writhing in pain. His legs had been shredded. It was a mystery as to why, the beast did not kill him like it did to all of its prey. While Tok Mat placed the poor man on his lap, the man cried, begging to be euthanized. As Tok Mat comforted him, several villagers asked him what was it that shredded his legs and left him to die.

He closed his eyes, with tears falling, he murmured softly, “Syaitan… syaitan (The devil.. the devil..)”

The creature, was smart. Its plan to strike fear into our hearts worked.

The following days, the villagers managed to fence the village perimeter. We even had the local village Imam, who held prayers, warding the creature off.

For three days we did not hear any roars. We thought the prayers had worked. On the third night, we had a Kenduri at the village head’s house. All the villagers attended it to sort of celebrate the supposed victory.

How wrong we were. That night, while we celebrated our victory, thinking that we had finally beat the creature, it struck and revealed itself.

It jumped over the fence, dashed straight into the light and took out three men including a boy in one go.

With its razor sharp claws, its golden fur and bright black stripes, the creature was a magnificent and yet a fearful beast. The son of a bitch then proceeded to kill four more by just swiping them and dragging two at the same time into the forest.

It was telling us, indirectly, that it was not afraid of us.

The next day, a team of Japanese patrol was brought in to hunt and kill this animal. I still remember the air of haughtiness in Colonel Watanabe Tsunahiko, commander of the 11th Regiment, when he brushed aside warnings made by the villagers.

“This is Japanese army! We fear no animal or man, whether living or dead. Trust me, in two hours, this beast would be killed, dragged and skinned before all of you.”

In two hours, only three of his men came out from the jungle, with one of them having lost a limb. Watanabe was dumbfounded. Then, with a team of another ten men – all carrying firearms – ventured into the forest.

For five hours villagers waited with bated breath as distant sound of firearm could be heard deep within the heart of the forest.

We never once heard a roar.

After five hours, Watanabe came out, his shirt torn and he had a scar on his face. He appeared shell shocked.

As he dashed nimbly to us, he slumped and stared at his hands, muttering, “不可能… 不可能..” Tok Mat sat opposite him and asked him if the tiger was killed. The Colonel looked up slowly at Tok Mat, and said, “This is not an ordinary tiger. This is a demon.” He stood up slowly and walked silently to his truck. It was the first time we saw fear in a Japanese soldier’s eyes. As he mounted his truck, he turned back to us and said, “If I were you, I’ll leave this village.”

All of us, the villagers, stood staring numbly as the Colonel, famed for his bravery and ruthlessness, drove away silently, leaving us to battle alone with the beast.

And battle we did.

Nearly 20 men, armed with machetes and axes ventured into the jungle, to face the man eater.

And again, only two came out alive.

Tok Mat, despite villagers telling him that the tiger was not an ordinary tiger, was hell bent at killing the creature at any cost.

And that was what he did.

One night, while everyone slept, he brought his cattle into his house. Killed one and left its body outside the entrance of his wooden house as bait.

Sure enough, the tiger smelt blood. As it sniffed at the door of his house, Tok Mat waited, observing the ten foot long tiger from above a tree.

As the tiger crept into his house, he quickly jumped down, dashed to the door and closed it shut. As the tiger tried clawing its way out, Tok Mat quickly set his house on fire after having poured gasoline all over it earlier in the evening.

But the tiger didn’t die. Instead, it broke through the wooden door and ran straight into the forest. Tok Mat slumped to the ground, clearly disappointed with the outcome.

As his house burnt, he realised the only to destroy the animal was to do the same.

For five days the forest burnt. Tok Mat had the Japanese assist him in that, as the villagers set fire on every tree and bush, their livelihood was destroyed. However, the old man kept assuring them that it was for their own good. For their own safety.

And I, as an eight year old, a silent observer to this spectacle, a witness, really, realised, that there was one similarity between the village head and the man eater.

Both were driven by vengeance and the thirst for blood. 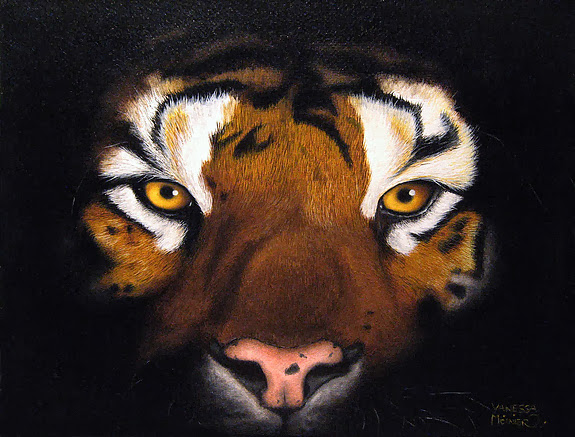