What could it have been? Was it a stroke? That was the question that ran in the minds of millions of viewers who were glued to their seats, watching the Grammy’s when Serene Branson, a reporter for CBS, stuttered and stammered as she said her lines.

“”Well a very, very hebbay aah., heavy do it Bert-taysin tonight. We had a very daris-daresin bite let’s go hit terrace-tazin Lis-tittle bit that had the pit.” Serene stammered on air as millions of viewers gasped.

Many drew conclusions and assumed that probably it was her stress related job that was the main cause for this mild stroke attack. And if it wasn’t stroke, what was it? An anxiety attack? But what could have been the cause of it?

“Are you alright?” Leslie Moonves, the Chairman of CBS asked, clearly worried.

She sat in the ambulance, with the paramedics making a fuss over her.

“Yes. I just had a quick check with the paramedics and they said there’s nothing wrong with me.”

There was silence as Leslie heaved a huge sigh of relief.

“Well, what really took place back there?”

Serene chuckled and then replied, “Just between you and me..” she swallowed, took a few more slow deep breaths, clearly trying to compose herself.

“You wouldn’t believe it, but I saw Lady Gaga emerging from an egg.” 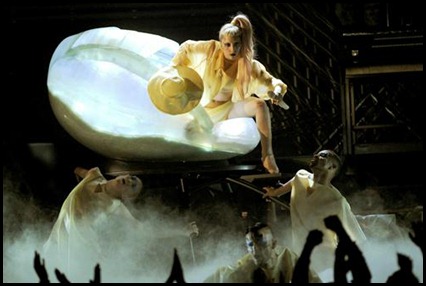