I listen but I don’t react,

Unless if I have to,

And when I do it’s for the good.

I laugh along with you,

But again, I’m part of you,

And you’re a part of me.

That connects you to another,

That leads you from one room to another.

I can also be a broken bridge,

Which disconnects you from another.

Many fuss about me,

Many are yet confused,

Many still fear me,

But I’m the inevitable.

How I came about?

Since the beginning of creation.

I was there during the time of Adam,

Silently stared as he ate the apple,

I was also there during the time of Jesus,

Long before the invention of pictures.

I witnessed the rise of Rome,

And the fall of Hitler,

I witnessed the Holocaust,

And the killing of the Tzars.

I was there when Lennon got shot,

And during the Gulf War,

And still I am here today, what an awe.

You can consider me a foe,

We have met before,

But you don’t remember,

I’m the ultimatum to Life,

The bringer of Change,

As well as a giver of Hope.

And I don’t blame you,

I’m someone you can’t see,

Even if you try to.

As I say again,

You know me not well,

But I know you swell.

Who am I you may ask?

I would smile and say, “I’m Death,

Now your time has come”. 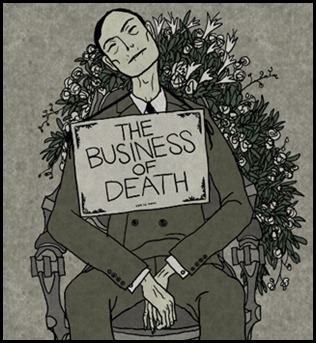 I think Life is a poetry of sorts. So if you put it in that context, I feel, Death too is a form of poetry. What is even more fascinating is that I feel, before one dies, Death actually comes to you like a long lost friend, embraces you, recites to you this poetry and then just as you’re shock and surprised just as I am, he takes you away from Illusion to Reality. In the end, we can only believe in one thing and only in one thing which is real and true, Death.