“People come into your life for a reason, a season or a lifetime.

When someone is in your life for a REASON, it is usually to meet a need you have expressed.They have come to assist you through a difficulty, to provide you with guidance and support, to aid you physically, emotionally or spiritually. They may seem like godsend and they are..

They are there for the reason you need them to be..

Then, without any wrongdoing on your part or at an inconvenient time this person will say or do something to bring the relationship to an end..

What we must realize is that our need has been met, our desire
fulfilled, their work is done..

The prayer you sent up has been answered and now it is time to move on..”

(Honestly Vashi, had you not advised me that day, it would have been a difficult phase for me. I triumphed because of this advice you gave. This meant a lot. Thank you 🙂

This last chapter is dedicated to my fallen ego. To my anger. To my state of depression and confusion. To revenge. To the filth that brought me all the way to what and who I was. Here I am, now, burying the ghost of my past and taking birth as a new being. I shall forgive and I shall forget.

Like the phoenix that burns in the fire and rises from the ashes, I too come out as a new being.

I am but a jewel in the lotus 🙂

“Paper Planes” by M.I.A. played in the background as i drove the Toyota Hilux past jagged rocks, passed Yaks and a kid tugging a horse.

I wore black shades and i could feel the Himalayan breeze on my face as i roared past a Buddhist Monastery.

The roads were pretty bad, but considering this was Tibet, i guess this was a blessing. The Chinese made roads all the way to Lhasa during their Cultural Revolution. And it’s thanks to these roads, the journey for the pilgrims were made easier.

It was three years since her death. I was promoted twice and thus i found a way to save money for this trip.

Exactly a month ago, i quit my job, packed my bags, withdrew all my savings and made a road trip with the Toyota Hilux along with Angel’s ashes, on a journey to the holy Lake Manasarovar where I had hoped and prayed that i would do her last rites.

My prayers were answered as the rocky paths cleared and there it was, the dark blue lake so stunningly beautiful along with the clear blue skies and from afar you could see the magnificent Mount Kailash with it’s full glory in the background.

I took a deep breath and smiled to my self. Lake Manasarovar at last.

The sun played at the back of the mountain as i parked the Hilux. The cold breeze blew on my face and a distant smell of Yak dung along with the giggling laughter of the young Tibetan monks who were relaxing on the nearby rocks made me feel welcomed.

I got out of the four wheel, holding tight to the earthen pot.

I’m a Christian, but Angel wanted this. I wanted this too. Religion didn’t mattered much to the both of us. To us, religion was just a tool used by shrewd rulers from the yesteryears to expand and conquer vast lands and kingdoms, all in the name of God.

I took a deep breath. I could feel the cold ancient Himalayan breeze clogging my nostrils and as the air expanded in my lungs, I remembered my research about the lake.

Bramha, the Hindu deity of creation, was said to have thought of this lake and that’s how this lake manifested, all through his mind. And thus the name, Mana (Mind) Sarovar (Lake). If translated directly from Sanskrit, it’s called the Lake of the Mind.

I removed my shirt, with only my jeans on, i slowly walked into the lake. It was chilly and the Himalayan breeze was blowing. I could hear Paper Planes playing in the background. I had put it on repeat.

I waded into the lake. I waded all the way until the water reached my waist.

The monks who were relaxing on the rocks nearby, observed me as i waded into the waters.

One of them, the leader i suppose, realized i was holding the earthen pot. He instructed the rest of his friends to stand up as a mark of respect.

I removed the yellow cloth that was covering the pot. Inside, i could see the grey ashes of Angel’s. I observed it for a while.

It’s amazing how life is. One moment you’re a living mechanism called the body and the next moment you’re an object of nothing called the ash. Every bit of you that came from nature, goes back to nature in the end.

It was a funny moment. I never had the urge to cry. I had no emotion. I was emotionless.

I looked at the monks. The leader nodded at me.

They started chanting a beautiful Tibetan Buddhist chant in unison. It was soul stirring. Like as though one’s soul could attain liberation by just hearing them. They chanted for as long as i could remember.

I turned and looked at the earthen pot. The breeze was blowing. The winds of change was flowing from the misty mountains of Kailash.

I looked at the blue sky, i could see a flock of swans flying towards Kailash, the heavenly abode of Shiva.

I never once regretted marrying Angel. In fact, the four days were the most beautiful days in my life.

I looked up at the sky. It was bright blue and clear. And then I looked at the monks, smiled, looked at the pot again and then closed my eyes.

As they chanted, with my eyes closed, i heard every bit of their soul stirring Tibetan chant. I mustered every ounce of energy from my body and poured every bit of Angel’s ashes into the lake.

And as the ashes floated away from me, i took a dip and surfaced as a new born man. 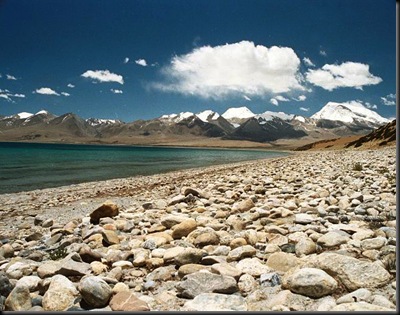