Have you ever seen a woman wearing a turban? Come to the Gurdwara (the Sikh temple) and you will see a few of them. And trust me, they will seriously freak the living daylights out of you.

But when you see a woman wearing a turban on her head, you know she’s not one to be messed with. Somehow, from the way she walks and moves, you know this bitch has some shit up her sleeves (or her daputta for that matter).

I saw a girl today at the Sikh temple, she had this huge veil on her head and there was this sharp pointy thing bulging at the top of her head. She had lovely eyes, and a lovely face, and she was fair. And she was amazing. But as i looked closer, i realised she wore a rocket styled turban on her head and covered it with the veil. Best part, she even had a dagger!

Holy Jesus crap! That freaked me out man!

And then as i sat in the Gurdwara trying my best to make out what the Granthi (Sikh Priest) was mumbling about, i observed the types of turbans that people wore in the Gurdwara and here are just few of them based on my observations:

Okay, the rocket is the easiest to spot because it’s one of the famous styles that you will see in the Gurdwara. The dudes (doods) wear their turbans in a pointy rocket like manner and when you observe their turbans, you somehow get the feeling that they will shoot out to space anytime from where they’re standing.

It’s also the hardest turban to tie (or so my dad claims because he never managed to tie a rocket styled turban). So there you go, the rocket.

The steamroller is the Rocket gone wrong. The dude (the dood) tries to tie the Rocket but ends up getting it all mashed up like a Chapathi on his head. So yeah, that’s a steamroller.

Best to do it with a black cloth because black disguises the effects well.

The yacht is the type of turban my father ties. It’s huge, vast, deep and you can stick your whole head inside of it and take it out without even messing the damn turban up.

I call it the Yacht because it looks like one. I think.

The rock is a turban tied with lots of starch. It hardens and even if you allow your 5 year old grandson to play with it, it will still retain it’s original feature. It’s good for thickheads like the old men in the Gurdwara.

They just sit there and pretend to listen to the Kirtans, nodding their heads as though they understood every word the Granthi is saying and when you wish to move or bypass them, you tell them “Excuse me, Uncle” they give you a cockstare and reply, “Oi Mundia! Uncle Ji bhol, phen chod!” (Translation: Oi Boy! Call me Uncle Ji you sister f**ker!)

This is the type of a turban that’s rare to find. And anyone who wears it, is either too lazy to tie it or has the balls to do it. The terrorist turban is well… like a terrorist’s turban.

Thick at the top and has that stupid tail hanging out at the bottom. Only lazy Punjabis tie it.

I know i used to tie it when I used to compete in the Gurdwara cup. I’ve learnt my lesson well since then.

This is where the infamous “Off” game began. There must have been one unlucky Sikh kid who came to school with only a piece of hankie wrapped around his tiny little “dood”, tied in place with a rubber band and everyone in the school thought he was a frigging light bulb.

They tried to turn him off. That poor little bastard…

This is not really a type of turban, but it’s something of a fashion.

You fold a hankie into half to represent the shape of a triangle and you tied it around your head. This type of turband can ONLY be tied if you have been de-virginised. Meaning, you no longer have the Adam’s apple at the top of your head. Most true Sikhs hate us because we did not grow our hair or beard.

We’ve betrayed the religion and command of the Guru by cutting off our God given hair.

Lastly, here’s an extremely rare turban that you can only find in Punjab. He’s the best person to loot because you know that he can’t run fast with that big ass turban on his head. 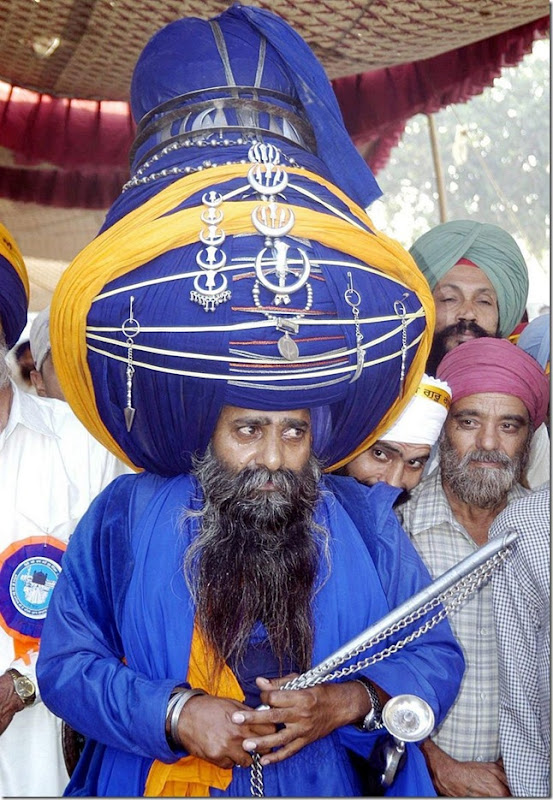