Yesterday, the Performing Arts Guild of UCSI (which I’m part of) did something really awesome to promote the club during the Club’s Day at UCSI. A Clubs Day is an event where all the clubs from UCSI, open booths so that the newbies in the Uni can join and enroll in the respective clubs.

A few clubs staged stuff to promote their clubs. The Cheerleading club did some pom pom stuff, the dance club, some dance, the music club did music while we, we acted

Initially we wanted to do a flash mob, but because we lacked manpower, the whole team decided to do a “flash skit”. I don’t know if such a word exists, but a flash skit is a skit performed out of the blues infront of a random crowd.

Here’s the videos of it below (by the way, the President of Unisia is a fictional character from one of our older plays called, Unisia. He’s played by our good friend, Adrian Thomas): 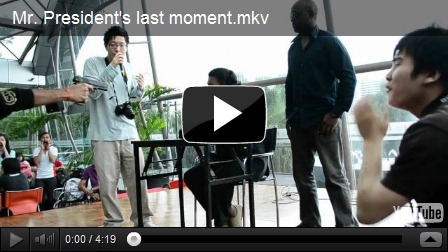 The lunging scene is a little brutal. But Lawal did an excellent job and I really wanted him to lunge like that to make it appear realistic.

I’m looking forward to more exciting awesome stuff for Performing Arts Guild this semester, since it’s going to be my last