There was once a man, who gave up his job and flew to Calcutta and joined a monastery. Now, this monastery was different, for it didn’t just practice spirituality and meditation day in and day out, it was a monastery to serve the community around. You can consider it as a community centre of sorts.

So this fellow goes to the monastery and bangs on the front door. The Master opens it and asks who he was. The fellow states his name and then the Master asks, “So why are you here?”

“Very well” The Master obliges and since that day, the fellow had been in the monastery. His first few weeks were the toughest as he had to get adjusted to the monastic lifestyle, not to mention the hot but humid weather and the spicy food of Calcutta. As time went by, the fellow grew frustrated. He still had not experienced God.

He goes to his Master and laments, “I have been here for 5 years and I’m yet to see God. Where am I going wrong?”

To this the Master gives him money and tells him to take the train to the neighboring village and help the village folk any way he can. The fellow obliged.

He took the train and reached the village in a few hours. As he stepped on the sandy soil of the village, a most terrible sight greeted him. The village folks lived in dilapidated homes! Some of the walls were broken while some of their ceilings leaked.

Being an architect five years ago, our fellow quickly contacted a few old friends who’re architects and well known, well knitted people. Soon he forms a team and in the following days, a bunch of volunteers had gathered and they immediately started working on the houses, transforming the whole village.

Work progressed and in two weeks, they had mended, transformed, cleaned and spruced up every house! As the fellow sat on the dusty sands of the village, all tired, sweaty, he observed the village folks going into their houses. Their faces had smiles in them, some teared. Children ran happily on the street, a few families came to him and thanked him.

And that’s when he saw God. In their smiling teary faces.

Our fellow took a train back to his monastery the next day. The following day, bidding his Master goodbye, he took a flight back home. Upon returning, he had already decided on what he wanted to do. He formed a community service centre and for years, he lived happily, experiencing God in the smiling faces of the poor, ill and needy. 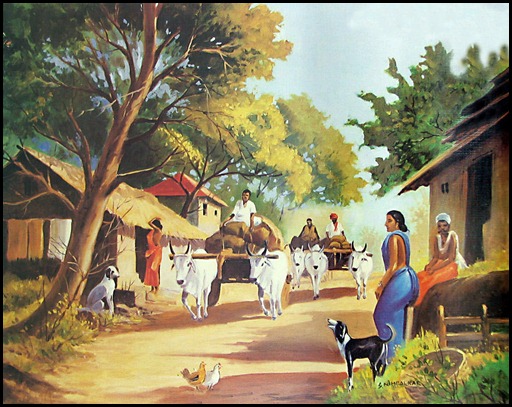