Ever recall the moments when you held your first liquid paper bottle or permanent ink marker? When you’re alone in the toilet or at the last seat behind in the bus, alone. The first thing that comes to your mind is to show your “presence” or leave a form of yourself in that particular location with that tool that you’re holding in your hands.

As for guys, we’re straight to the point: “Fuck”

That’s the first thing that comes into the mind the moment a young school going boy holds a liquid paper bottle or a marker pen and he’s sitting alone at the back of the bus.

Girls, this is the answer to your question, “How the heck did this moronic stranger get my number??” All thanks to some dickhead who advertised your number at the back of a bus or in a toilet cubicle.

For the love birds, it would be the boring old symbol of love with a thin red indian arrow going through the heart with the arrow’s end that looks like bits of pubic hair stuck on it. At the top would be the guy’s name and at the bottom would be the girl’s. 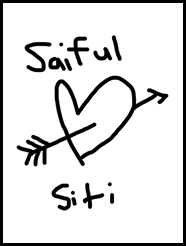 Some hate a certain dude in their classroom or school, so this would be their usual statement: “Ali babi” “Ah Chong pundek!” “Siti cibai!”

There was once, I remember seeing a real “chat” forum going on in the one of the seats in the bus. One dude insults one guy, and the rest starts replying. It was like this:

This dude must have pissed with this Abu guy so he decided to vent out his fury on the bus seat. He scribbles “Abu puki!!!”

Unfortunately, Abu sees this (it could have been a different Abu.. so it must have been that particular Abu’s bad day) so Abu replies, “Mak kau lah babi!”

The dude replies the next day, “Bapak kau konek pendek”

A total outsider sees the whole conversation taking place and decides to be a good samaritan. He says, “Jangan gaduh lah!”

He gets the reply the next day, “Lu jangan masuk campur la puki!”

Suddenly, everyday passengers in the bus can see a war of words taking place in the form of “Liquid paper chat” on that particular bus seat. I actually used to look forward to it everyday! After school, I used to rush to get that particular bus and sit at that particular seat to see the updates. They were hilarious! It was like watching a tv serial show but the only difference is, it’s taking place in the bus in the form of words. It’s like watching a movie that has no visuals but just subtitles.

They replaced that seat with a new one after a month.

I remember when I scribbled the word “Fuck” on my school desk for the first time in my life. It was as though I achieved something. The joy of seeing that word so big and clear on the table (I scribbled it on the leg so that no one knew I did it. But heck! I did it!) it was indescribable. The word “Fuck” was like an answer to every of our life’s questions at that time. It was our way of venting out anger, unleashing the feeling of rebellion in us. The hatred of education and teachers and life. Showing the world that we have attained the stage of puberty successfully.

The moment you scribble the word on the table, it was exhilarating! It’s like marstubating for the first time. It was a thrill!

And then I realised it started to get a little immature. So I moved on to greener pastures. I started scribbling, “Sukhbir was here, dd/m/yr” at the back of each bus seat that I sat on.

And 5 years after that, you’re back in the same bus, at the same seat and you look at the scribbling you made 5 years ago, your thoughts go back into that period of time. How you were at the time. How you behaved. What happened that day. How times have changed since then. How you have changed. etc.

And you start reflecting.

I still do scribble these days whenever I get the chance. It’s childish, but I want to remember the moments I lived in. Because 10 years down the road, you probably would forget how you were 10 years ago. And when you see these scribbling, you become yourself again.