“Yeah hi. Where’s the tabla?” Everyone stops whatever they were doing and everyone’s attention was on a Punjabi man who wore a collared t-shirt with a brown cargo pants. He had a small blue turban and he definitely looked lost but he seemed like he wasn’t. He had a thick black beard with white strands of hair protruding out from each corners of his beard.

He walks into the centre (it was Thursday, so it was the weekly bhajans) and the first thing he says instead of “Hello, I’m new”, he comes in and says, “Yeah hi. Where’s the tabla?”

And everyone stops and observes this Punjabi dude. He walks over to Shyam (Shyam is a 12 year old kid who plays the Tabla for our centre’s bhajans) and says, “Boy, this tabla yours?”

“Very good. Now move” Shyam moves aside rather hurriedly so that Mr – Owh–I–Know–How–to–Play–Tabla–Very-Verrrrry-Well–Singh sits in front of the tabla and starts hammering some Punjabi beats on them. The first thing that came into my mind was, “Owhh my fucking God, what the fuck is Bala thinking by bringing some Punjabi dude into the centre??”

I looked at Bala and Bala smiles at me and says, “Bro, he’s gonna come and teach us Tabla lessons”.

I looked at the Punjabi dude. He’s still hitting the tabla. I looked at Bala, Bala was mesmerized by the dude. Someone please stop him! And then suddenly, as though he heard me, he stands up, turns to the ladies side, looks at Surekha who was playing her harmonium, walks over to her and then asks her, “Girl, this harmonium, yours?”

“Very good. Now borrow me” Without getting a nod of approval from her, he carries the harmonium away from her as though it’s his own, walks over to his seat at the boy’s side, sits and plays a Kirtan tune. Surekha’s face depicted a painting I remember seeing of Seeta in the Ramayana when Seeta was being carried away by Ravana. Spiritually horrified.

I was observing the whole scene with my mouth wide open. It was 7.25pm and bhajans starts (and should start) at 7.30pm. 5 minutes more for bhajans and we have a lunatic in the house experimenting with everyone’s bhajan instrument. The worst part is, he’s a fucking Punjabi!

I bet the first thing they’ll ask me would be, “Hey Sukh! Is that your uncle??”

Owhh shit… I was thinking of various ways to stop the dude from playing the harmonium when he suddenly stops playing, looks at me and says, “Play”

I was confused. “Play what?”

He reminded me of those horror movies which depict lovable nursery rhyme characters in a very evil and graphic way. He even sounded like one of them too.

So i accompanied his “Kirtan” He was pleased and as I was playing I kept an eye on the clock. 7.27pm!! Someone stop this dude!!

Suddenly Bala realises that he needs to come to his senses because he was engrossed with the dude playing the harmonium. And his Bhajan Coordinator instinct picked up, and Bala came to his senses. “Err i’m sorry Uncle.. i think you have to pass the harmonium to the girl back, because Bhajans is going to start very soon”

He looks at Bala and says, “Owhh but can i play the tabla?”

I looked at Shyam. Shyam was horrified. Bala said yes. Shyam rubbed his eyes with his shirt. I looked down at my Dholak. I was bracing myself for the most shittiest bhajan to come.

The first song was sung by Bala and of all days, he had to choose a tough song. And Mr Hero Singh played a bhangra beat to accompany Bala’s slow song. It had to be a Punjabi to screw things up. So i closed my eyes, I didnt want to sound rude or appear rude to be playing my Dholak slightly louder than his tabla. I was being respectful. But after a few more songs, i said to myself, “Fuck this!” and played my loudest.

At the end of the Bhajans, Uncle Karuman comes up and says, “We would love to express our gratitude to Brother Santosh Singh who now would be conducting Sangeetham classes and Tabla classes every Mondays-” Before uncle could finish his sentence, Mr Santosh says, in a typical Punjabi slang, “Yes Monday is very good. I want to train the vocals with the girls..”

I hung my head low.

And true enough, after bhajans, a few people came up to me and said, “Woahh Sukhbir! Now you have a partner already ahh. Your own country man!”

To top it all up, the dude actually goes around to everyone and passes them his “Business Card”. An uncle walks to him and says, “Sai Ram brother! Welcome to our centre!” he extends his arms in an embrace, and Mr Santosh says, “Yeah thank you. Here’s my card” and passes the dumbfounded old man his card.

And this is exactly how it looks like. And i’m dead serious about it! 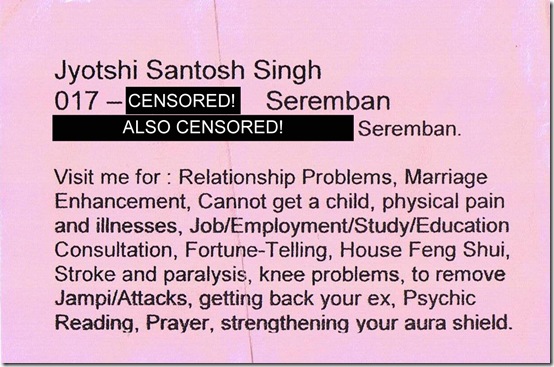 And it turns out, it was not Bala who invited him into the centre (thankfully). It was someone else.