The bus engine roared to a start. It was our last day at Parthi, as I stroked the sands of Parthi with my right foot, I remember asking Bro Sathya; “Anney, if you were to write a book about our trip to Parthi, what would you call it?”

And I got my answer that day.

As we stood in line waiting to board the bus back home, Bro Sathya walked over to me after the short prayer, held my hand, smiled and said softly, “If I were to write a book abut this trip, I would call it Sai Inspirations”

And Sai Inspirations it is.

Everyone is in a car. Some are in luxurious ones, others are in autos and busses. Some are in trains and planes. Others are on bicycles. But there’s a small fraction of people that love to do the walking. As they walk they admire the little things on the road side during their journey.

They don’t complain about the journey. To them they have complete faith that they will reach the destination some day no matter how long it takes.

Life is like that. It’s a journey. We’re all in different vehicles and we’re all making our way to our destination. Some of us drive and some of us walk.

My journey began in Feburary. After a year of being absent from Swami (mentally) I realised it was time to go to Parthi again. I needed the time to be alone with myself in some foreign place. To explore and to rejuvenate. I was dying for this. And I also wanted to bury the ghost of 2006.

So I did what came into my mind. I signed up to be a facilitator for the Yathra 09. I know, me of all people being a facilitator… But this was my only window of opportunity.

My first task was to design the Yathra 09 scarf. And that’s when I got introduced to the term, Swami’s Army In (M)aking.

It all began one day as I was designing the scarf, I decided to add the words, SAI at the front of the scarf. And the words SAI would then be followed by Serving And Inspiring for each of the three letters. 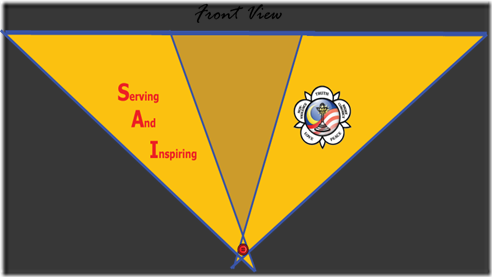 But Shamini Akka (who also happens to the head of the whole Yathra 09 organising committee)  rejected it and added the words Swami’s Army In (M)aking instead. And that’s how this whole concept was born. I was against it at first. I told her it sounds like a cult organisation where we’re breeding army to take over the world. It sounds violent and it’s so not Sai at all!

And she said that I got the whole concept wrong. The actual definition for an army is to DEFEND and not to ATTACK. In her terms, she’s saying we’re defending our values and the teachings of Swami and soon time would come when this army would be mobilized for the good of mankind.

I on the other hand thought she had too much coffee.

The kids had to do their Sadhanas (Spiritual Practices) to get themselves ready for their holy trip to Parthi. I lingered on Facebook and listened to Jimi Hendrix and The Beatles over and over again.

It was only on the last few days that I really started doing my Sadhanas. And that too not whole heartedly. I was easily distracted. I was fearful because I was afraid if I would make a good faci or not. I was also fearful because it’s only in Parthi when all your negative energy comes out. You become a different person there.

And a different person I did become.

*** Sai Inspirations is a daily blog about Sukhbir’s Yathra 09 experience from the 27th of November to the 22nd of December 2009. To read more about them, go to http://dramedyremedy.blogspot.com/ This is the first post about his experience. More are yet to come.