Almost every kid in Malaysia would dread and start peeing in their pants when they hear the very mention of this word (probably many wouldn’t as many parents don’t cane their children these days unlike our/my parents did).

The very mention of this word would bring shivers down my spine. My hands would get all clammy, my feet all jellyish like and I would start having this feverish sensation. I know I’m doomed.

The situation would always start when you least expect it to happen. You would be happily minding your own business in your room, happily playing with your toy soldiers when you hear your mum yell your name out loud from the kitchen.

And she would scream in “that” tone because it’s a natural motherly instinct to yell your name in that specific way when she’s really pissed at you. It’s like a sign or signal of impending doom to tell you that you’re dead and no matter what you do, she’s going to make sure that you’re going to go through hell and even God won’t be able to save you from her clutches.

So you throw your toy soldiers on the floor, hurriedly run to the kitchen wondering to yourself what you did this time.

You approach her, observing her stance; her hands are on her hips, she’s breathing heavily and her eyes are narrowed on to you. It’s an obvious body language that says she’s extremely pissed at you. So you, being a kid, go up to her and put on this innocent face and you try your level best to put off her anger by asking her, very innocently, very sweetly, “Yes ma?” and praying deep down that she melts and says, “Awww nothing! Now go back to your toys and have a nice day son!”.

But no. It doesn’t work that way.

“What is this?” She would point to a toothbrush.

“It’s a toothbrush ma.” I would reply.

And for a second there, I used to feel like a champion of the world because I outsmarted my mother by answering such an easy question which she didn’t even know.

“I know it’s a toothbrush! But what is it doing here??” She would ask.

This is where I get extremely confused. If she knows it’s a toothbrush, why did she have to take all the trouble to ask me? Why couldn’t she just go straight to the point and tell me what the whole problem is? Why keep me waiting, impatiently, dreading what I did this time? I hate surprises..

Anyways, back to the toothbrush..

My answer would be the same as every child in any part of the world would answer. “I don’t know.”

And that’s where she blows up! That simple “I don’t know.” pisses her off even more. And she asks you even more crazy questions that really mind rapes you.

Naturally, I would look at the toothbrush to double check if it indeed had grown a pair of legs.

“Tell me! Do you think the toothbrush grew legs, decided to take a stroll and end up in the sink??”

I wouldn’t reply. Instead I would shake my head, no.

“Then how can the toothbrush end up in the sink??”

Honestly, this is when my mother would come in handy if ever the CIA and F.B.I. need my mum’s help in interrogating terrorists for valuable top secret information.

“Tell me who planted the bomb?? Don’t tell me the bomb grew legs and decided to take a stroll and ended up under that building! Tell me!”

Back to the toothbrush story..

I would keep silent. Just to be safe and mum would repetitively question me about the toothbrush. And when she’s frustrated that I can’t seem to find an answer and that I’m just being silent, she tries a different tactic.

“Why are you silent?? Why are you looking at my face like that? Did I just grow flowers on my head?”

Instinctively I would actually look up at her head to see if she indeed grew flowers just to be safe.

I succumb to my ever impending doom even further.

“Do you see flowers??” She would ask.

“No.” I would say a little louder.

“No flowers.” I would say softly.

From flowers on her head, she would divert the whole topic back to the legless toothbrush.

“So tell me, how did the toothbrush end up in the sink then? Did it grow a pair of legs and walked to the sink?”

“Then HOW did it go there?”

There would be a moment of silence because:

b) I’m pretending to think just to buy some time.

There would be a silence for a good 30 seconds and then she would ask again, this time even more forceful.

I would squeak out, “I don’t know..”. Almost on the verge of tears because I know it’s coming.

I would shake my head.

“Maybe this will help.” And she scurries to find the thing I dread the most.

The deadly rattan cane. The Rotan!

This is where everything happens really fast. It takes her a good few seconds to find the cane from her hiding spot (she hides it like as though it’s some kind of an exotic pet of her’s) and she comes charging at you, beating you this way and that.

The whole situation lasts a good 20 minutes. Sometimes even more. But she plays it safe and she enjoys it. In between the beatings she would mind rape you with questions that are obvious and that you can’t answer. Regardless of the answers, you’ll still be caned.

I searched the whole house for the rotan’s hiding spot and one fine day, I found it hidden in my mum’s cupboard.

I took it, and threw it away.

So the next time she screams my name, I know I’m safe this time.

I go and meet her in the kitchen. She starts off by mind raping me again with her usual questions. Apparently this time it’s something to do with a jar of cookies going empty.

“I don’t know.” I answer confidently.

She mind rapes me by asking, “Don’t tell me they grew wings and decided to fly away?”

I honestly don’t have a clue where she comes up with such thought provoking metaphorical questions.

But I know I don’t have to worry. Mother has lost her weapon. I wouldn’t mind a few slaps on the face and my ears getting pulled. Just as long as I don’t get caned, I’m happy with anything.

So the whole questionnaire session goes on until she loses it.

She says her magic words, “Maybe this will help!”.

I used to think they were summoning curses to summon the cane because she enjoys saying it right before she brings out the cane every single damn time.

“Maybe this will help!”. And she goes running to get her cane.

It’s like her way of saying, “I’ve got a surprise for you but I know you’re not gonna enjoy it but I’m going to give it to you anyway!”

So she runs to find her trustee cane but only to come back empty handed.

Her facial expression has changed. And I know it’s a sign of a defeated person. I’ve turned the tables on her! I smile out of freedom! I’ve outsmarted my own mother! Bravo Sukhbir you cunning sly fox!

She walks slowly to me, approaches me and softly says, in a very demented tone, “Smart. Very smart. You hid the cane. Very smart.”

And there’s a moment of silence as she sizes you up. I stare at her, I’m reeling with joy. Yes! No cane for today! I take in the moment of pure awesomeness. Every second of it.

And that’s when she drops a bomb shell on me.

“You think that’s the only cane I’ve got?” She grins. “I know you would find that one, so I got another prepared, ready for a time like this.”

“Infact, what makes you think I only have ONE cane? I might be having two, maybe three, or maybe four.. No. Make it five.” She grins even more.

I pee in my pants.

And that was the day I had the worst caning in my life.

But you know, had it not been for my mum’s caning, I wouldn’t have had the experience which gave birth to the inspiration to write an awesome post such as this. 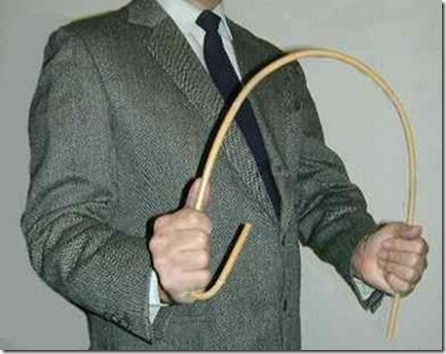 “You hear that sound? It’s the sound of impending doom.”