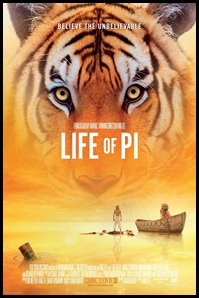 Never had I ever experienced having any thoughtful, deep and intellectual discussion about a movie after watching it with my friends in the cinema. Usually all we used to do was light a cigarette or two, crack a joke and head for a mamak nearby for a late supper.

Life of Pi was the first and I was glad. As we walked out of the cinema, my friends started rolling out questions and their thoughts about the movie. Never had I ever seen them this.. intrigued and as they put "blown away".

In 2006, when I read the book, the author, Yann Martel wrote it in such a way where my then "blocked" mind was ripped, torn, and rebuilt brick by brick into a more open one. Honestly said, this was the first movie adaptation of a book that was equal in terms of quality, imagination and story telling.

This, I think is the only novel that doesn’t require a person to read a book or watch the movie first. Whichever way one does, both mediums drove home the message that I got when I first read the book in 2006. And today, again, I experienced it.

All three actors portraying the role of Pi Patel; Suraj Sharma, Ayush Tandon and Irrfan Khan respectively did an amazing job in bringing out some of the core traits/characteristics that was described so beautifully by Martel in his book. The innocence, the inquisitiveness, the feeling of loss and separation and finally, an enlightened and wise Pi Patel could be felt if one had read the book.

Mychael Danna captured the intensity of being lost at sea, the beauty of the zoo in Pondicherry, India in such a remarkable way through his music. The soundtrack of the movie composed by him is definitely a must have for any fans of film soundtrack.

Life of Pi truly redeemed Ang Lee’s status as a director who’s capable of bringing out imagination and bringing them to life on screen. A MUST watch for any movie fan (and fans of the novel).

I give it 5/5 and by far, for me, this had been the most fulfilling and best movie for the year 2012. I wouldn’t be surprised if the movie bags home an Oscar or two.

A little caution though: Watch the movie with an open mind, be prepared to be blown away by the visuals (would be terrific to watch it on 3D), the compelling story (Ang Lee did an amazing job) and the message the movie brings.

Owh! And Richard Parker too 🙂

What did you guys think of the movie? Would love to hear your experiences and thoughts about it. Share away by hitting me with a comment!