“So, have you found the solution O’ Wanderer?” Both the Guardians of the Gates ask me in unison.

I reply, “No. Please give me more time.”

I soon sat on the brick path, I close my eyes and focused on this problem. I focused deep and hard for a solution. And then, as I’m lost in meditation, I don’t focus on my problems nor the solution at all. I let go. Infact, even the word “Let go” ceased to exist.

I slowly open my eyes to the dimly lit environment. The Guardians of the Gates are still standing, patiently observing me. I’m still seated and like a Shishya, I ask them permission to ask them a question.

“I have found a solution.”

“Very well. Tell us.” They say in unison.

“Assuming you were the other Guardian, which gate would you point, to direct me towards Heaven?”

I stood up walked towards both the Guardians and I said, “Then I’ll choose the door that was not pointed.”

The Guardians stood static for a while and then, slowly they moved their mouths to speak, “Very well.” And then the both of them turned and pushed the big red door on the right to open.

There was sound of thunder as the door droned to open. And when it was finally open, the Guardians motioned me to step in.

I could see nothing from the outside as everything was pitched black. But as soon as I stepped in, as though there was an automatic switch, everything came to light and I saw magnificent mountains surrounded by a beautiful lake. The sight was wondrous and was indeed heavenly. I embrace the sight by closing my eyes and spreading my hands.

“This is Heaven. You’ve earned your place here.” The Guardians said.

“We hope you find yourself here.” They said in unison.

They slowly turned and closed the door behind me, leaving Heaven all for me. 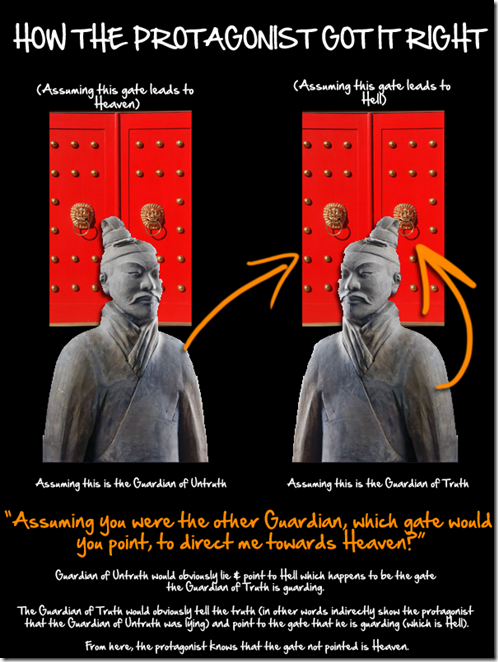 (This was an original story derived from one of the Buddha Sutras. There are a thousand more of such “riddles” that were created by Buddha himself to ease mankind in self enlightenment. Apparently this is the easiest of them all and the one who can answer this riddle, has the chances of attaining enlightenment faster and easier. His or her perspective about the world and life would become different if this question were to be solved by his or her own effort.)