The evening breeze blew on Radhika’s soft wet skin, sending shivers to her body as she emerged from the Yamuna river with her Gopika friends.

All five sat by the secluded river bank – a secret spot only known to these beautiful women – combed their hair naked, basking in the warm gentle rays of the sun to dry their body. They helped each other tie their hair, wiping it dry, giggling and joking among themselves in the process. After that, all five walked and plucked flowers which grew in large numbers by the river bank, trying out different colours, types and sizes on their heads.

Placing the flowers on their dancing hair, a few of them pretended being princesses and damsels in the king’s court, while a few others sat on swings made out of vines, carefully tied to a banyan tree. They belted out tunes and played game.

Suddenly one of the Gopika’s cried out, “Our clothes are missing!”

Everyone stopped what they were doing and started searching high and low for their clothes. In the chaos of seeking, none of them heard the gentle sound of the flute coming from behind one of the bushes.

She heard it and told everyone to calm down. “Quiet! I hear someone playing the flute!”

“Owh dear! What if he catches us in this state?” One of the Gopikas cried out.

Radhika, being the only bold one, calmed her friend down, “What can we do? We need our clothes back.”

“Radhika, can you ask him where the clothes are?” The flute playing grew slightly louder, cajoling Radhika to put her thought into action.

The flute playing stopped. And a youthful voice replied, “Who goes there?”

“I’m a Gopika. Listen, someone stole our clothes.”

“Owh dear, what a predicament!” Came the reply.

Annoyed, Radhika asked, “Have you seen them?”

“What did you girls wear?”

The voice broke into a laughter. “My mother warned me not to stare at women. How can I possibly tell?”

Feeling absolutely irritated, Radhika responded, “Don’t be silly! Did you take our clothes?”

The voiced tsked. “Owh, are you putting the blame on me without seeking for any evidence? You should be trialled for assuming!”

“You should be prisoned for playing the fool!”

“I certainly don’t want that!” The voice replied.

“Then help us search for our clothes!”

There was silence. The voice broke it, “Very well. Give me a few moments.”

Radhika heard footsteps from the other side. In her mind’s eye she visualised a youthful looking man searching for her clothes. A part of her sensed that she was being watched and so she warned, “No peeking! I’m a woman clothe-less.”

The voice replied, “And I’m just a mere flute player. I found your clothes. You can come and take them.”

Radhika observed the thick bush, which was as high as her – preventing her to see the other side – hoping for her clothes would be thrown out from it.

“Are you coming?” The voice asked.

“Aren’t you going to throw my clothes?” Radhika asked.

“I don’t treat my clothes that way.” Came the reply.

“I wouldn’t mind. Throw them!”

“But I’m a man of principles and I certainly can’t treat yours that way too. You can tell about a person through the way she treats her clothes.”

Radhika rolled her eyes. “What can you tell about me?”

There was a pause, the voice replied, “Reckless.”

This made Radhika even more annoyed. “I know you stole them! Give us back our clothes!”

The voice laughed at Radhika’s desperation. In her head, Radhika imagined slapping the flute player hard on his cheeks. What a pervert!

“I’ll give them to you. You have to walk through the bush to claim it.”

“I promise I won’t do anything of that sort. I’m just a harmless flute player.”

“Look, do you want your clothes? Or do you prefer walking home naked?”

It was a tough choice for Radhika. She turned to look at her friends who huddled close to each other, covering their bodies in embarrassment. They urged her to go in.

“Radhika, only you can do it. We are too afraid.”

She bit her lip and thought about it. The flute player reminded her, “Trust me.”

The voice laughed. “You’re silly. I can see you despite you closing your own eyes.”

She opened her eyes slowly and her sight fell upon a youthful cowherd sitting a top a tree branch. He had been watching all five of them from there!

Her anger dissipated when she her eyes fell on his face. His eyes as bright as the full moon, his lips as supple as a rose petal in the morning. His cheeky smile illuminating the clearing like a rainbow after a rainy day. His hair dancing in the gentle evening breeze.

“Where are my clothes?” Radhika asked, abashed.

“Why are you covering yourself?” The mischievous fellow asked. “You’ve got a beautiful body.”

Radhika tried hiding her smile. She could sense her cheeks blushing, as she observed the grinning youth caressing his flute, his eyes upon her. “You have no right to make such statements. You’re covered.” She said coyly.

The youth laughed, admiring her boldness and wit. “Your clothes are all there.” He pointed to a nearby rock, where the clothes were laid, folded neatly.

Radhika dashed to them and held all of them to cover herself. “Turn around!” She asked the youth.

“I said turn around!” Radhika replied, her smile growing wider. She couldn’t help but enjoy playing her part in the flute player’s little game. She found the youth absolutely wild and bold.

“Not until you tell me nicely. Where are your manners?”

“Right next to your clothes.” The youth smiled.

“Please.” She pretended to be desperate.

Radhika sighed, “Can you turn now?”

“Not until you tell me your name.”

“Please, Krsna!” The desperation in her voice, that pleading, caught him by surprise. He loved the way his name rolled down from her beautiful pink tongue and out from her soft slightly wet light red lips.

Thoroughly enjoying the event unfolding before him, he used his hands to cover his eyes. “Don’t worry, I won’t peek.”

“Promise me you won’t remove your hands from your eyes?”

“Yes, I promise.” He grinned. She forgot reminding him about the part where he was supposed to close his eyes. But the youth knew, even this was done on purpose. From the cracks of his fingers, her saw Radhika’s skin dancing as the sun shone on her beautiful hips. Her breasts gently dancing as the golden necklace on her hips dazzled his eyes as his eyes slowly moved to her navel.

Sensing she was being watched, Radhika turned around her back to Krsna. Her tanned skin glowed as she slowly wore the top half of her dress, slowly, like a woman would dress after a passionate love making. And then she bent on purpose, gently lifting her leg, the anklets making music, to put on the bottom half of her dress.

When she was fully clothed, she tilted her head slightly, grinned coyly, and dashed out from the clearing, the clothes of the Gopikas safely secured in her arms.

“Hey! Come back!” Krsna yelled, jumping down from the tree. “Stop!”

She stopped before she ventured into the bush, turned and looked at Krsna.

“What’s your name?” He smiled.

“My name means, beauty and wit.” She smiled, bit her bottom lip and dashed out.

“Radhika. No, to me you’re Radha.” Krsna smiled. 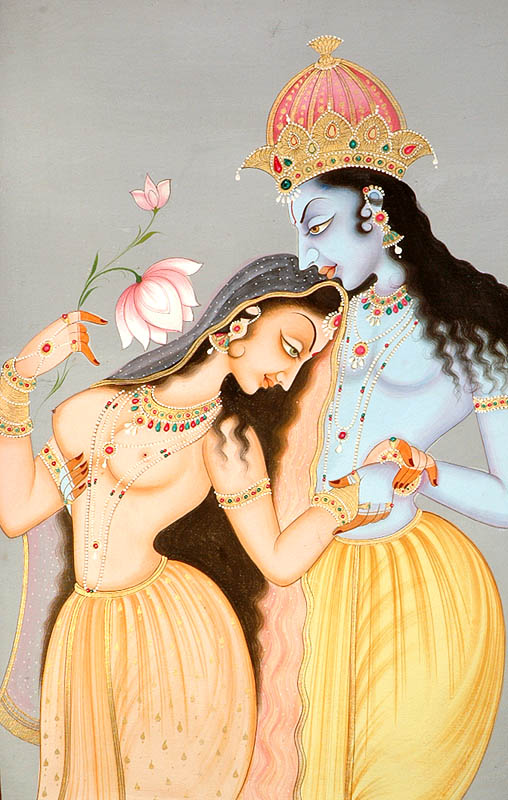 Krsna and Radha had daily romp sessions after that by the river.