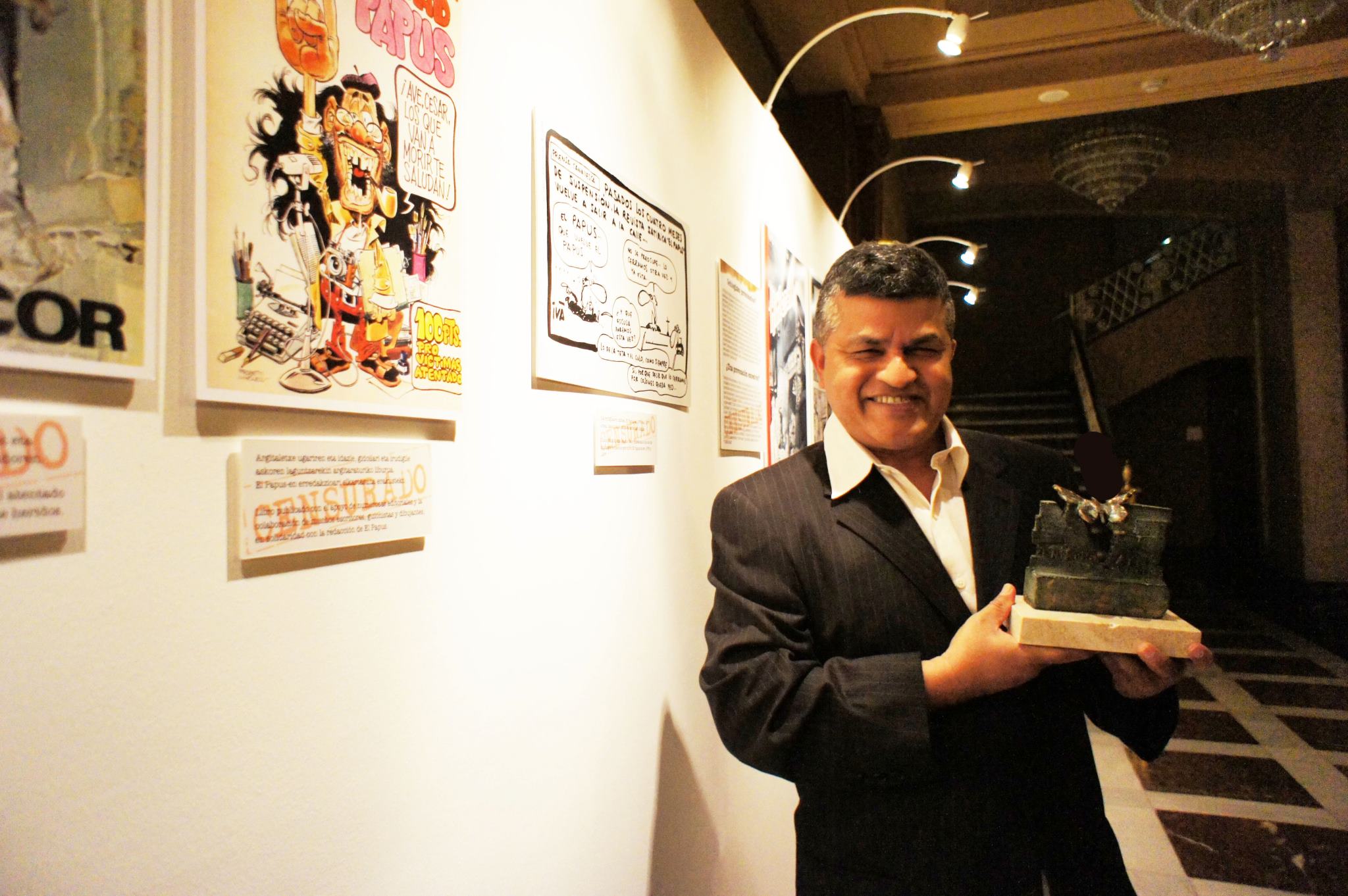 Starting off drawing at a tender age of 12, Zulkiflee Anwar Ulhaque or better known as Zunar is a renowned Malaysian cartoonist who has gained international acclaim for his straight to the point but controversial humour. The 53-year-old Cartoonists Rights Network International (CRNI) Courage in Editorial Cartooning Award recipient was born in Pendang, Kedah in 1962 and slowly rose to fame through his submissions for the Gila-Gila magazine in his young adult life. Now, finally gaining international acclaim, Zunar stresses that he can no longer be neutral as even his pen has a stand – a way of life he constantly demonstrates through his cartoons which has seen him being behind bars three times, charged under the controversial Sedition Act 1948 along with several of his books confiscated and recently rearrested after posting bail for a whopping nine counts under the colonial act which has been deemed by many human rights movements as colonial and draconian. However, few would know the story behind Zunar’s rise and what drives the cartoonist to sketch what he feels. I recently visited Zunar at his office to sit down and get to know the cartoonist a little better.

**This Q&A was unfortunately not used by The Rakyat Post as it was controversial in nature and lacked objectivity. Realising the dire need for this wonderful and enlightening Q&A to be given a life of its own, I’ve decided to post it here with several of the images taken mostly from Zunar’s Facebook profile and website. This post is in solidarity with Zunar.

How did you become a cartoonist?

My first cartoon appeared in a children’s magazine when I was 12-years-old. Back then, my parents insisted that I take up the Science stream, to which I did but my interest in art continued until 1983 even after finishing my studies in Science Education at Universiti Teknologi Malaysia (UTM). Despite working as a laborer, I continued submitting my cartoons until I had my own column for Gila-Gila until I started work as a lab technician. However, I could only focus on cartooning which led me to resign in 1985 when I became a full time but not on payroll cartoonist for Gila-Gila. With my cartoons becoming political in nature, I joined Berita Harian and The New Straits Times – a stint which lasted only for six months due to many restrictions. Not being allowed to produce my best, in 1995 I resigned and gave up cartooning. I became frustrated as I assumed such cartoons had no future in this country. Three-years later, the Reformasi era in 1998 woke me up and I became a cartoonist for Harakah Daily. In 2003, I started submitting cartoons to MalaysiaKini until today. I think my responsibility as a cartoonist is to highlight issues so that people can understand them. Cartoons are a potential and effective tool in getting the message across.

Who are the well known figures or cartoonists who inspire you?

I don’t have specific cartoonists. I like American cartoonists and occasionally look at them for inspiration as their style is direct to the point. European cartoonists usually add details with focus given on scenery, something not practised by the Americans. I’m also inspired by important creativists such as Indonesia’s Willibrordus S. Rendra, Víctor Jara from Chile and “Father of the American Cartoon”, Thomas Nast who is remembered to overthrow the governor of New York through his works. They all have a similar stance as me when facing a moral crisis.

Why is a cartoonist like you considered a threat by the authorities?

I can’t speak on behalf of them but I can assume based on several insider information that the real reason the government is worried that my cartoons have the potential to influence teenagers perspectives on Malaysian politics. Five-years ago, I started calling my cartoons ‘people’s cartoon’ as they highlighted issues and policies which affected people directly. This is different than political cartoons which highlights the power struggle between politicians. The cartoons connects people and with the advent of the internet, more and more people have access to it. The cartoons also highlight issues that are not allowed to be debated or discussed in the mainstream papers with not many being able to give their views. I am alright if they claim that my cartoons are defamatory. They can always file a civil suit against me or rebut it. But why rebut using a criminal act (Sedition Act), detain me, lock me up in prison and treat me as a criminal? They don’t try to correct themselves but try to stop me from cartooning. For me, I think this is a cartoon government.

Your cartoons of late have been targeting Prime Minister Datuk Seri Najib Razak and his wife, Datin Seri Rosmah Mansor. Why only these two and not others?

First of all, my mission is to fight through cartoons. I take the ‘why pinch when I can punch’ approach as the most effective way is to give a punch and by doing so, one must understand his or her target. In this case, Najib is the most powerful man in Malaysia because he makes all the decisions pertaining to budgets, policies and he also is responsible in deciding where the country is heading. That is why I concentrate on Najib and Rosmah as I feel it is pointless in targeting someone who has no power to make decisions. Only very few cartoons poke fun at the rest. Previously, my cartoons used to be about former premier Tun Dr Mahathir Mohamad when he was in power. Now that he is no longer in power, I rarely draw him. The job of a political cartoonist is to criticise the government of the day through his cartoons. In Malaysia it is challenging despite political cartoonists being a part of a democratic society. However, I find it strange that they blame me as they are the one who practise corruption. They come for me instead of correcting themselves.

In light of this, have you received any threats be it physical, emotional or mental?

No I have not received any physical threats but only several poison emails.

Some of your cartoons invoke a sense of activism albeit in a witty way. How does art assist in activism and why is it important?

Talent is not a gift, it is a responsibility. This is very important for artists to know. Some artists knowing that talent is a gift, work for their own benefit. A real artist carries the people’s voice through his or her work. An artist is the last person or group to support a repressive government because artists are sensitive people leading them to know the feeling of others. When you have a repressive government in Malaysia, every artist here should stand up and demonstrate a strong stand which must be seen in their work. You have to show in your work if you don’t agree with things. You can’t be drawing about other things when the people are suffering. Because when we keep quiet, we are indirectly supporting the repressive government. For example, a snatch thief gets away with a woman’s handbag, will you be neutral? If you’re neutral, you’re supporting the thief and not being a help at all. The same analogy applies here. If every artist comes forward and show their stand, the current government would have been thrown out a long time ago. However, sadly majority artists ignore, are arrogant and don’t do anything. Where are the artists and singers? Where are theater plays? In Malaysia, many artists keep silent as some are comfortable. Some even support the current government as they obtain monetary assistance. A group of ten cartoonists got RM 5 million grant from the government before the 13th General Election to perhaps do cartoons to support the government. Cartoonists must be responsible for the content of their work.

There are talks that you’re being paid by the Opposition to create such cartoons. What are your comments on this?

I’m among the poorest cartoonist in Malaysia and all my cartoons can be viewed for free. For me, financial comes second, principle comes first. There is a difference between being paid to draw cartoons and drawing cartoons and getting paid. I don’t take payments from anybody regardless if they’re the Opposition or ruling government. But ofcourse, I survive through my works that I draw. As a creativist, one has to choose between money and principle. Two-years ago, I was offered by a pro-BN cartoonist group to receive an award with RM10,000 from Najib to which I declined. I found it as an insult. How can I receive an award from the same person who banned my works and detained me? An award to me is when you remove the bans on my works and allow me the freedom to draw. Many who make such speculations believe I am like them. Perhaps they get paid to do their job. I support the Opposition as we share the same vision – that is to remove the current corrupt ruling government. If Pakatan Rakyat comes into power and starts screwing up, I’ll be highlighting this through my cartoons.

You were a speaker for a United Nation’s forum titled “Defending Artistic Expression – Time For The UN To Act” held in Geneva earlier this month. Can you share with us what issues did you raise there?

I was speaking on my case in Malaysia which, for the international community was an eye-opener. They asked me, how can a country with one of the tallest building detain a cartoonist? I also explained on the Sedition Act 1948 where I was told to provide a separate official report to the UN with views on the Malaysian government. I am in the midst of writing this report. I also called for Jan 7th to be made the World Cartoonist Day in light of the Charlie Hebdo issue which took place in Paris, France this year. My stand on this is clear, that although I’m a Muslim and do not agree with the magazine’s cartoon, however, as a cartoonist they have the right to draw. We have to respect it as there are many ways to address the matter but not through violence and killings.

What are your future plans and upcoming cartoons?

I am set to hold a ‘Laugh at them’ campaign sometime in May. I just want people to laugh as laughter is the best protest. In the protest, we would hold up pictures and caricatures of ministers and people can laugh. You can’t do anything in Malaysia anymore because if you protest they will detain you so when you laugh, what can they do? The groundwork for this has already begun. I also am currently working on a mini notebook for tourists where the top ten issues of the country would be depicted in cartoon format. Apart from that, I am now in the midst of preparing for exhibitions and talks in Stockholm, Sweden, Berlin, Germany and London, United Kingdom with all three set to be held in May.