I’ve been sleeping early and waking up early these days and today after so long, I drove to Port Dickson by myself. Well not really by myself, it was more of a roadtrip for Rvind and me because I drove down to leave him at the Marine Station (he’s starting his internship there).

Had a good jolly drive. A slow one with ciggies (yes, yes I’m cutting down on it haha) and lots of jokes and stories of good times.

I sat by the beach just nearby the Marine Station while waiting for Rvind to get registered. I closed my eyes and adjusted my breath following the rhythm of the waves. As the waves touched my feet, I inhaled and as they left, I exhaled.

I remembered the story of Rama as the waves touched my feet. He stood there, staring at Lanka across the sea where Sita was held, kidnapped by Ravana. As he stared at the sea, a huge wave came and it looked like it was about to crash onto Rama. But as it approached Rama, the wave became tinier and tinier in size until only the ripples touched his feet not wetting him anywhere else.

And in those waves, there was a beautiful garland made out of pearls. It was a gift served as an offering to Rama, as a mark of respect and love by the Sea God.

I made sure Rvind settled down and then I drove back home.

Coming home, was a huge change. I was greeted by loud Hindi music emanating from my house. I called out to my mum amid the loud song in the background and mum greeted me smiling. The first thing she said as she let me in was, “Don’t mind the loud music. I think it’s time we put the music loud like we did once before.”

That was a relief. I’m glad she’s moving on as well

I’ve been reading the Srimad Bhagavatham. It’s the life stories of all the Avathars of Vishnu.

The story starts off with the grandson of Arjuna (one of the protagonist of the Mahabharata), Emperor Parikshit, who’s been bitten by a poisonous snake and he’s only left with a week to live.  So in a moment of urgency, he calls upon his fellow sages (the kings back then used the sages and holy men as advisors).

So the Sage Suka (the son of Sage Vyasa, who’s the original author of the Srimad Bhagavatham and is also the author of the well known Indian epics, the Mahabharata and the Ramayana) narrates to Parikshit the stories of the avathars of Vishnu. 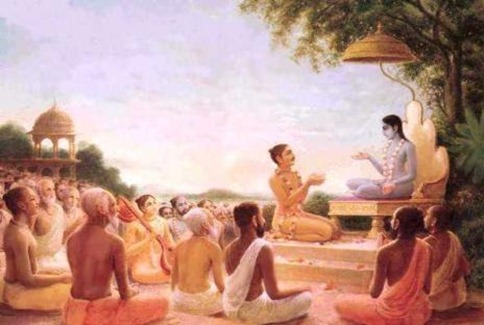 I have not read till the end, however I do know the ending as I did my research. In the end, Parikshit, who no longer fears death nor life, realises that he’s neither living nor dead. Infact, death and life no longer has anything to do with him (or with his soul rather). He embraces both death and life and attains Nirvana/Moksha/Self Realisation. That’s how this beautiful book ends. The key word here is: Acceptance.

Anyways, tonight mum and me are going to venture on something new. Since I’m confirmed going for my India trip (touch wood if I don’t fall ill or end in the hospital, I’m positively sure I’m going. I got that same feeling I got back in 2006 and 2009), we’ll both be doing Likita Japam to prepare me for the trip.

What’s Likita Japam you may ask? It’s a form of spiritual practice (Hindus call it Sadhana and the Muslims call it Zikr), whereby you write the name of your favorite deity 108 times on a piece of paper (preferably a note book) every day at the same time. It helps with self discipline and makes one positively charged.

Sorry if I’m freaking you guys out with all the “mambo jumbo” up there. But I think it’s time I come clean and honest about myself. I’ve got a spiritual side on me. I’ve ignored and left it aside for a long time. Time to pick it up once again.