I can still smell her blood on my hands. Some of her fur is also flying around the house. But her cage is empty.

How do I begin?

She was fine yesterday. Had her bath and she was jumping around except for the fact that her vagina was bleeding for no reason. The night came, and she grew weak.

Last night I slept early around 8.

Woke up around 1 when something urged me to open my room door to let her in. She was sleeping in the hall. I called out to her but she just laid there.

I slowly brought her into my room and we slept.

I’m glad for one thing though. We spent the night together. That’s one thing I really cherish.

In the morning I let her out of my room and woke up only at 11 to see blood stains all over the floor.

Mum came back and I took Lessy to the vet.

The Vet said Lessy has Parametra (or something like that) whereby her Uterus is affected and the Uterus has to be removed. Plus her breast cancer was back.

He suggested to me that it’s best to put her to sleep.

So I called mum and mum said, “No don’t put her to sleep. Just tell the doctor to do his best.”

So I left Lessy for surgery and drove back home. On the way I stopped by at the Tom Net Cyber Cafe. I just felt like keeping my mind occupied.

Was midway checking Facebook when the Vet called and he sounded serious.

“This is Doctor Ee here. I’m so sorry but we have to put your dog to sleep. I just cut her open and removed all the cancerous organs from her Uterus. But I don’t think we can save her anymore. Her organs are filled with puss. I’ll put her to sleep if you give me the green light.”

I sighed and then replied “Is it okay if you can put her to sleep while I’m there with her? I want her to die while I’m holding her.”

A wave of calmness blew over me. It was like in a dream. You know what’s happening but you’re dazed.

I called my mum, told her to wait downstairs.

Picked her up and in the car I told her what took place.

“No. Don’t put her to sleep. Just bring her back home.”

But I was against it. “She’s suffering Ma! We have to put her to sleep. She’s going to suffer and die. Do you want to go through all that?”

“But if you put her to sleep, it’ll be sinful”

“If we don’t put her to sleep, and let her suffer and die, wouldn’t that be sinful as well?”

I sighed. My mum was quiet.

“Nevermind, let’s see what the doctor has to say.” I said at last.

We reached the Vet. The doctor called us in and there was Lessy, on a cage. She was on anesthesia. I could see the surgical wounds on her. The vet then brought the gunk that he had removed from Lessy’s tummy.

It was all black. Kind of reminded me of the photo of the lung cancer victim on the cigarette packs. It was black and bloody.

We brought Lessy home. Her body was limp but she was still breathing.

I placed her into her cage, her body covered with a blanket. She was sleeping. So I left her where she was, and went over to my room.

As I was listening to music, mum came into my room, tapped me, she was crying and she said, “Lessy’s gone. She died already.”

I rushed to Lessy’s cage. Deep in my heart, i was telling myself that my mother must be wrong. Her eyes are playing tricks on her.

Lessy laid motionless. I touched her, and even called her name. No reply.

A part of me thought she was sleeping. She really looked peaceful. I called out to her again, “Lessy?”. Still no reply.

And that’s when it dawned on me. Lessy’s gone forever.

I sat there for a good few seconds, not knowing what to do when suddenly I felt weird, my face twisted and I cried.

Dad came over to me and said, “It’s okay Sonu. She was old. She had to go” But it was the way he said it. He too had that choky voice in him. It made me cry even harder.

And then I stopped crying and said, “We have to bury her.”

So I called Sangkaran. Asked him if he had a shovel (cangkul in Malay). He said he didn’t had any. I called Vashi and thankfully she had.

I was about to leave when Sangkaran called again and said he found one at home.

I carried Lessy, she was still in her blanket, her body limp, and I remembered the moment I brought her to my house for the first time.

She was in my arms too. The irony.

Dad said he wanted to follow. I was thinking of doing this myself. But dad and Lessy had a special bond. They were good friends. So I didn’t say no.

My brother said “Bye bye” but he didn’t know what was going on. My mum kissed Lessy. She told me to bury Lessy at my grandma’s former house (now they have turn it into a highway. The house was demolished three years ago)

We slowly made our way to Sangkaran’s place, took the shovel and Dad said, “Let’s just bury her here in the jungle”

In my taman, there’s this jungle. So we went inside and tried digging a hole but the ground was just too hard.

So we decided to bury Lessy at my grandma’s place in the end.

Grandma’s place, it’s all filled with dense bushes. Alot has changed and what was a familiar landscape that had been engraved in my mind is a distant desolated ground.

It was hard finding the right spot where grandma’s house was but I found the spot thanks to the old familiar lamp post that was still standing tall despite all the modernity surrounding it.

I dug a spot for Lessy. As I was digging, it felt good, all my anger, frustration, fear, sadness, everything, memories, came out. It felt good. And I dug harder and harder and deeper.

Soon it was just nice enough to bury Lessy in it despite the fact that it was not really deep.

I sort of thanked God that Lessy was small sized.

I went over to the car, opened the door (half expecting her to jump out from it) and tried to take her out. She was “sleeping” like a baby. Honestly, her body was still warm. And a part of me felt that maybe she was alive.

And that’s when the hard fact knocks on your head. It’s death’s way of saying, “Hellooo. She’s goneee.”

I slowly brought her over to her resting ground. I looked down, and her face was turned to me, her eyes staring at me.

I cried, because that was how she used to look at me. Those eyes filled with curiosity and yet mischief. But here’s where it gave me goosebumps. Her tail was straight.

I guess, when a dog dies, their tails go limp and they loose the curves.

I placed her into the ground with the blanket still on her. My dad and I said a prayer and scattered sand over her body.

Slowly, using the hoe, I covered it up.

My dad had brought her food bowl, chain and everything that belonged to her. “If we look at this, we’ll feel pain”

I placed Lessy’s food bowl and filled it up with her food, placed her chain and stuff into the tin can that had contained her food minutes earlier and I begged forgiveness to Lessy.

Got up and got into the car.

“Good dog, or bad dog, someday everyone has to go. This is life.”

“I never knew this moment will arrive.”

‘Me too.” My dad agreed. He sighed and said, “She was my best friend. My companion.”

I felt sad. I kind of felt bad in a way.

She was a good dog. I got her in February when was just a small pup. I was 13 back then. We used to wrestle on the bed with my brother. Took her for her first walk in December 2003 (mum never used to let her out). I always expected her to live till she’s 14 or 15 years old.

I came back home, and I tried recalling the moments before she died. I remember playing this song before my mum came to my room. 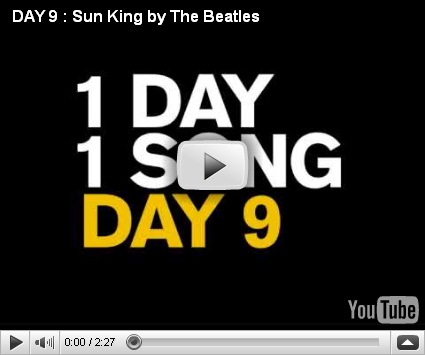 I guess, it was her way of leaving the world with style. 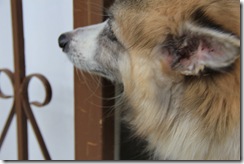 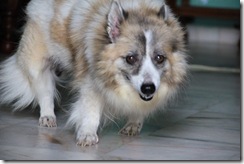 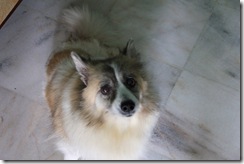 I’m sorry guys for being so emotional. I know it’s very rare to find a guy to write about stuff like “crying, feeling sad etc etc”. But I really loved Lessy. She was a good friend.