“Arise, awake and stop not till the goal is reached!”  –Swami Vivekananda

It was already 4 days without cigarettes and my urge for it was getting stronger. I was starting to feel restless and during meditation at times, I would have thoughts of myself holding a stick and puffing on it. But I would change the thoughts.

I also observed two other people in the Darshan Hall who sat without moving their bodies, at the same spot every single day. One was a Japanese guy and the other was an Indian local. They both were my inspiration.

However, like all of us, we all need a little push to further move. My push came in the form of our visit to Lepakshi. It’s a historical site for a few reasons: 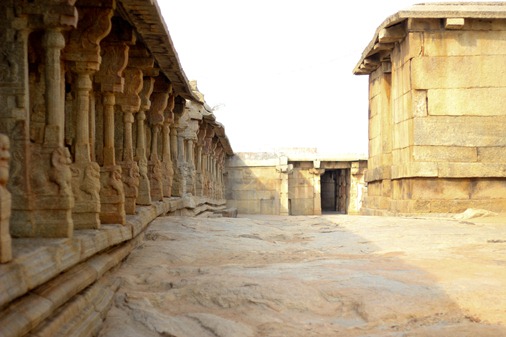 a) The location where Jatayu from the Ramayana epic died (the spot is above in the photo on the ground). Thus the name Lepakshi as it means, “Rise O’ Bird.” Prince Rama and Lakshmana who were on the lookout for Sita as she was kidnapped by Ravana, found Jatayu bleeding with his wings cut (Ravana sliced Jatayu’s wings off as Jatayu was preventing Ravana from kidnapping Sita). Prince Rama approached Jatayu, held it’s head and said in Sanskrit, “Lepakshi.” Which meant, “Rise O’ Bird.” Jatayu died in Rama’s arms and he was cremated there. 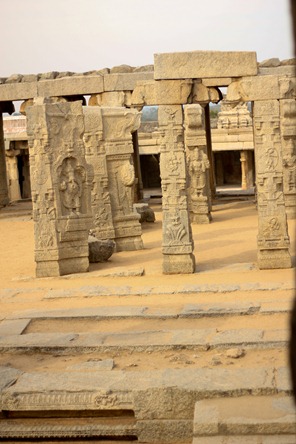 b) The Kalyana Mandapam (the Wedding Hall) of Lord Shiva and Mother Parvathi is also built here. Above in the photo is where the wedding is supposed to take place. And all the pillars depict the Gods and Goddesses coming to pay their respects during the wedding. 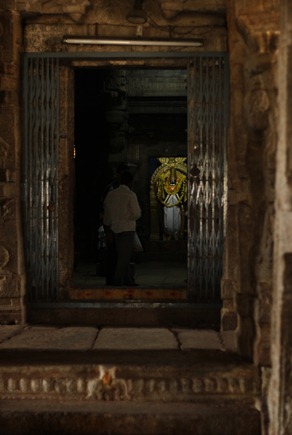 c) The Veerabhadra temple (another manifestation of Lord Shiva) is located in a cave around the premises of Lepakshi.

d) And in the inner sanctum of the temple, there’s a cave where Saint Agasthiar meditated. Unfortunately no cameras were allowed in so I couldn’t take the photos. 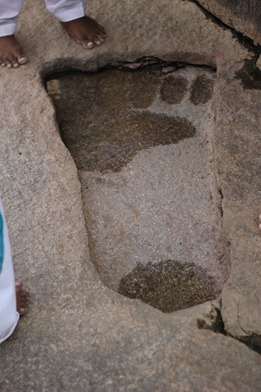 e) The foot prints of Mother Sita. People during the time of Lord Rama were huge. And Mother Sita was supposed to be a short woman for her time. Amazing.. 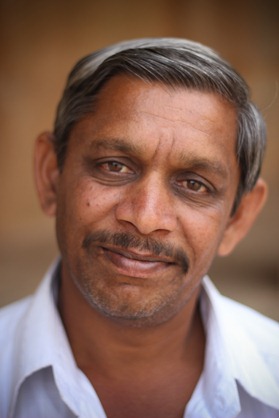 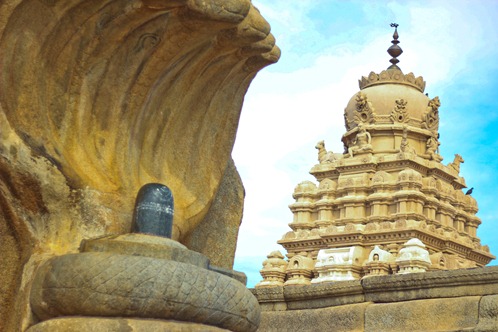 The massive Shiva Linga outside the temple compound.

We were taking photos around the Shiva Linga outside, just a few turns away from the Veerabhadra temple when I started feeling weird. Like I was being pulled or attracted to some unknown force. So I held my camera, left the rest of the group who were taking photos, I took a few turns and those turns brought me ever closer to the Veerabhadra temple. 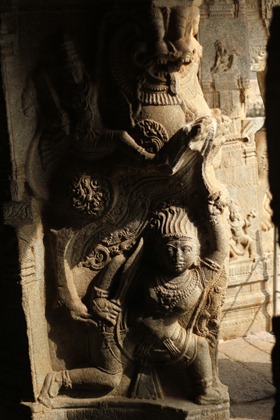 The 500 year old carvings on the pillars of the temple

A weird sense of nostalgia engulfed me as I looked at the intricate designs of the temple and the insides of the inner sanctum. 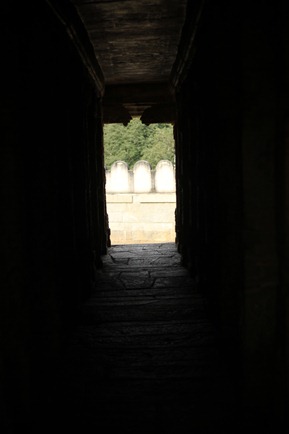 Many pathways may seem dark and bleak, but they all lead to the same light in the end. 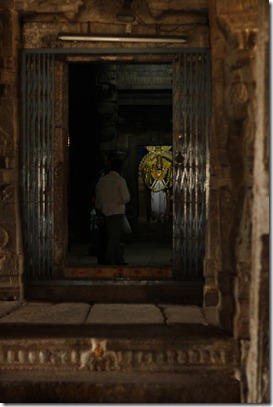 The inner sanctum of the Veerabhadra Temple (if you go inside and turn right, the cave where Saint Agasthiar meditated is in there and if you turn left, is where a Shiva Lingam was installed by Lord Rama Himself 5000 years ago)

It was asthough… I had been here before. But I guess it was just a feeling everyone gets when they come to a place such as this.

The temple was old. And in the temple, a Shiva Lingam had been installed by Lord Rama Himself about 5000 to 7000 years ago. The energy pervading this temple is so immense.

I was walking in a daze. Like as though I was dreaming.

I walked into the temple and looked around. Everything was old.. Or rather, ancient. From the smell to the sound, to the sights. Everything.

The temple priest approaches me and says, “You want to pray?”

I nodded my head. I was so taken aback by everything that I couldn’t say a word. I just wanted to hold the energy in me.

He did a prayer for me, turned around and asked me, “Father’s name?”

He said a prayer for mum and then asked me, “Brother name?”

“Manbir Singh.” Again a short prayer and then he asked for my name.

He smiled and said a prayer. He then applied Kum Kum to my forehead and gave me Coconut and a banana as a Prasad (offering gift). He asked for a few Rupees as money for the prayer (every temple has it. You give a ringgit or so for a Coconut Archanai). I told him my wallet is in my bag outside. I’ll go get it. He obliged.

I held the coconut, deeply in gratitude to the presiding deity/energy that was engulfing the temple.

I felt like sitting down somewhere and just meditating my life out. I just wanted to be one with the energy. It was so calming, so pervading and so powerful that it made my mind go blank.

I took the coconut and walked out to get my bag.

I told the rest about the temple and after some sightseeing around the temple’s compound, we came back to the temple.

While everyone as were looking around, I got attracted to the idol of Mother Durga. The same priest was there and he said, “This Mother is strong. Pray.”

I looked at her loving face and prayed. Prayed that I be healed physically, mentally and spiritually.

Our tour guide showed us around the insides of the temple. As he was showing us, he then said, “Follow me”

We followed him, turning left after the presiding deity of the temple (Veerabhadra). He opens a small chamber like door, and led us through a dimly lit narrow path and into a cave. A small cave like room to be exact (I believe, previously this temple was a cave).

The moment I set foot into the cave, I felt as though I had been lifted up by something.

He then turned around to us and said, “Agasthiar Muni meditated here once. The energy of this place is so strong. That was how strong his meditation and devotion was.”

We looked around the room. It was dark except for light coming from a lightbulb in the room. There was a bat perched high up the wall.

Our tour guide then touched the cave’s wall and then said, “This is actually not the ACTUAL area he meditated. He meditated behind this wall. But the they sealed the room. You can touch the wall for blessings.”

I stared at the wall for a moment and then I touched it.

I immediately felt like fainting. I stopped myself from flopping onto the floor. I gathered myself up and looked at the walls of the cave. Mesmerised. The cave felt so beautiful and I caressed the walls like how one caresses’ a baby. I even placed my head on the walls of the cave and like a lunatic just let it rest there. My mind went thoughtless. That feeling was so.. blissful, beautiful, powerful and I was afraid of it in some degree.

As we all walked out of the temple, I couldn’t hold myself any longer. While the rest were praying, I decided to go to a corner to just immerse and take in this beautiful energy. To contemplate. To be one with this.. energy.

I sat and closed my eyes for a few minutes and then I opened them and looked at the idol of Veerabhadra. I spoke to Him and asked, “The feeling I got was so beautiful. I want to feel it everyday Swami. Every single moment. Why can’t I feel it?”

As I said that, I heard my Inner voice saying, “You’re not ready yet. You’re still afraid. Time will come.”

I agree. I still do get afraid when I meditate. I know, there’s this one layer of meditation where one has to go in even deeper. And I was just afraid of letting go of myself to go in deeper.

I closed my eyes and took in the whole experience.

I started to thirst for this feeling. I substituted my smoking addiction for the addiction of this feeling. It was so.. immense. So beautiful. I’ve never felt anything like it. Never. And I promised myself that one day I would visit this place again to meditate.

I had killed the urge to smoke that day. In return for it, I resurrected my real true self that day. Awakened it. My thirst grew even more

Alright, I have to stop here. Got to go for my rehearsals. Thank you so so much for reading! I will post more, I promise

I love You very much (always did, always have, and always will)