I dreamt I was in a Gurdwara and we were ordering Ladoos. The priest was a little weird because in order to get the Ladoos we had to order the amount and then sit with the crowd (who’re also awaiting their orders) and join the Kirtans.

The Kirtans were going on and I was day dreaming as usual when I could feel someone patting my right shoulder. I turned around and looked up, and there my father was, part of the queue (there’s a queue to collect the Ladoos) and he gestures at me to join him as well. I smiled and was surprised to see him there.

That’s when it dawned upon me that my dad was already dead and that this was just a dream and I started crying. I cried because my dad passed away and the fact that I lost Swami (Sai Baba) too. In the dream I referred to Sai Baba as my Master.

I cried extremely hard and I blamed God for not keeping to His word. For failing to come to me when I’m in trouble. The moment I thought of that, I suddenly could see a bright blinding light flashing before me and in between the blinding white light was the figure of Shirdi Sai (fully clothed in white) and he was sort of balancing his left arm on a bolster like thingy and his right hand was raised as blessing. His legs however were kept straight and not folded like in the photo below. The rest of the posture was exactly same except like bandana was white not orange. 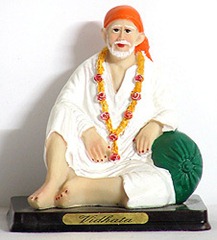 It was a bright light that surrounded his “image” and the image kept coming closer and closer and I heard a deep soothing voice telling me something. Something about not to worry. Unfortunately I forgot what the voice said.

As the image came closer, I stopped crying, I stopped feeling sad and angry and I started feeling calmer and peaceful. It’s like someone putting you to sleep (or sedatives). You slowly start to realise the fact that you have to be at peace with yourself and you start accepting it.

The figure came close to me and the image of Shirdi Sai was smiling and it was bright and as it came close it sort of like engulfed me like how one covers himself with a blanket, that’s how I felt. The image engulfed me and I felt lighter and at one with Him.

And suddenly we’re travelling places and we’re travelling through the skies and I can see the world below me. Everything I see is from the first person perspective. I can hear Him talking to me as we passed these places.

We came to a war torn country like Iraq and the place was smoky and fiery. It looked like war just took place and I can hear Him telling me in Malay, “Dari luar, dunia ini binasa. Tapi dari dalam, dunia ini cantik.”

I think it’s something to do with looking inwardly rather than looking outward.

And I woke up.