The bombs pound the already shattered grounds of Gaza as the little children huddle close to their mother. Their eyes wide with fear as they close their ears to deafen the sound of bombs falling.

Their house shakes, bits of dust drop from the ceiling as windows crack and break to the rhythmic thumping of the bombs. While millions celebrate Diwali a thousand miles away in India, lighting firecrackers, Palestinians in Gaza fight to survive in the burning streets.

Then the thumping stopped. The house stopped shaking. There was silence.

“Mother is it over?” the little one asks his mother. His mother gets up and peers through the window. She then turns around and says, “I guess so, my child.”

The little one tugs on his mother’s hand and begs her to let him out. “Can I go out to play? Please?” The mother ponders hard and then gives in.

The child exclaims in joy and rushes outside.

A gloomy scene greets him, as bodies of civilians, innocent victims of an unnecessary war can be seen languishing, greeting the little child. But surprisingly, the little child doesn’t mind. He runs past burning buildings, finds a tyre from a blown up truck, picks it up and rolls it, oblivious to a murderous spree that took place just moments ago.

He laughs as he is joined by numerous of other kids in the street, who like him, were oblivious to the war. All they wanted was to play and be happy.

And then.. the sirens were heard. And the thumping of bombs falling to the ground.

As the bomb drops on the streets, a women’s scream can be heard from one of the houses. Another child dies. 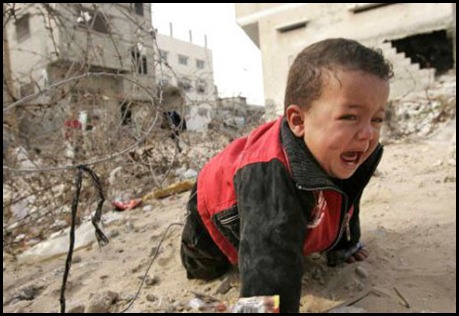 My heart goes out to every child, woman and elderly around the world affected by war. War is totally unnecessary. Totally a waste of resource, money and time.