There she stood by the window which overlooked the sea. The sun shining brightly in as she stared at me, her eyes keen and filled with love.

I crept closer, first hugging her from the front, my hands caressing her hips which were curvy and accentuated in certain areas. The outline of her hip shone as the evening sun danced around her smooth, soft tanned skin. Her skin, though dark, gave out a certain glow. A glow of a girl who was in need of love and affection.

As my hands caressed her hips, she came closer to me and I felt her silky black hair touching my chin. I kissed her slowly but passionately on her head and slowly moved to her forehead; her third eye and I kissed while both my hands slowly made their way from her hips to her stomach.

I kissed her eyes while praying that she sees good things with them and then I kissed her nose, hoping that her senses were clear. And as I reached her lips, my hands cupping her face like a flower, I kissed them, feeling hers to mine. I prayed she professes her love to me and to herself.

As we felt each others love, I saw her as one with me.

As I kissed her lips, their warmth and wetness, a stark contrast to each other, made me found her even more beautiful. And as our lips locked, our tongues seek each other out. I felt her body’s warmth against my skin. And as the evening breeze blew in, after our tongues finding each other, I slowly undressed her, revealing her naked but beautiful body.

Her body cast a silhouette as the evening sun shone behind her, making her appear like an angel.

I caressed her neck and brought my face closer. As I gave her soft smooches, I felt her hands slowly rubbing my chest. They slowly proceeded to go back, rising slowly to my neck and then finally to my head. Her fingers played with my hair as I played with hers.

And then we laid in bed, tickling each other. Hearing the sound of her laughter, her happiness, made me kiss the back of her neck. As I slowly made my way to her lips, her body turned to face me.

We made love in the evening sun, I felt her warmth combining to one, I felt as though she was a part of me. A missing link. My soul mate.

We became one that evening as the sun set in. 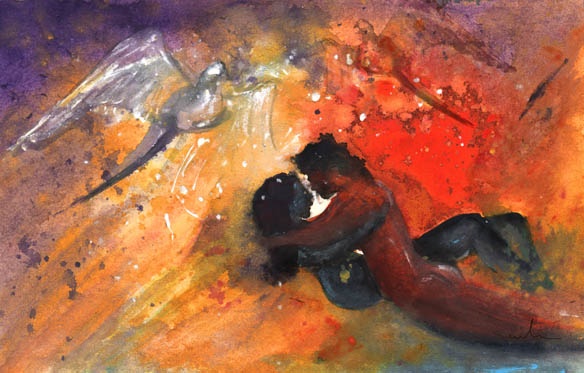