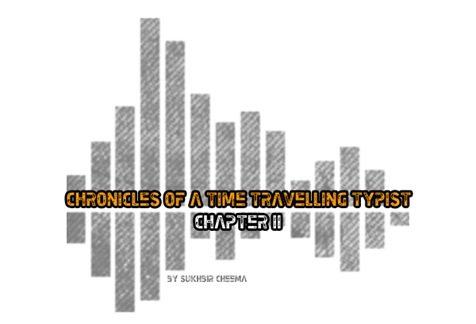 I walked back into my room as a dazed, confused but excited person. The Time Machine really works; or rather the typewriter really works!

As I walked towards it, I notice a new note on the Time Machine which read, “4 more events to go.” I sat on my bed and started brainstorming on what next event that I can change in my life.

But I couldn’t think so I tried opening my room door to go out to the hall only to find it locked from the outside. With desperation to go out I called out to my parents but no help arrived except for the sound of the television outside.

Frustrated, I sat on my bed and thought of an event.

I thought of my mother. Her as a bus driver. She was a workaholic and she found various ways to find the ends to meet. But in 1999, her livelihood was shattered. Her very bowl of rice, the school van which she had saved up money to buy, was stolen at 3 in the morning.

We never found the van and my mum ended up being a house maid.

Which I have to admit, I was ashamed of at one point in my life.

Students will say to the teachers what their parents were doing. But I would go over to the teacher and whisper, “Housemaid” and walk away before I could see the reaction on her face.

There was even once when my class teacher asked what my mum was doing and I lied that she was a doctor. My mum soon found out and she was utterly disappointed in me.

It was that day I learned to accept her for who she was. But she was battered. Hurt terribly. And just like her, I was curious as to who would have done such a thing?

Much to my surprise the door opened. I guess the Time Machine controls the door somehow..

I walked into a bright light and out to the open night sky on the 13th of June 1999.

The night breeze blew on my face as I observed the surroundings. I felt my back pocket heavy and out fell a Police Siren. It had a hailer and also a huge bulb which if you turned on, wailed like a Police Siren and emitted the warning signals like the ones you see in the cop movies.

It was a cool and windy night, everything seemed quiet except for some dogs barking at the distance into the night. Few light bulbs flickered from the lamp posts nearby.

I slowly made my way upstairs to the 3rd floor of the flats where I lived and waited for the moment to arrive.

I checked my handphone. It showed 2.55 PM. I lit a cigarette and stood smoking, making sure I blended well with the shadows.

At precisely 3.05 AM, a black Proton Wira car slowly inched closer to my mum’s van. I stood alert, the siren ready in my hand.

What took place was almost unexpected.

From the black Proton Wira, a figure came out from the car. Two figures to be exact. A lady and a man. Both friends of my mother’s and both of them, if I recalled well, expressed their sympathy to my mum when she lost her van.

Just like my mum, they too picked school kids. But I suppose business became slow for them because most of the school kids dropped out from their vans and started following my mum’s.

It’s all business like Al Pacino says in the movie The Godfather.

The lady had black sunglasses on, had short blonde hair and had a device in hand. A screw driver.

She started prying my mum’s van.

No. My mum’s van had no alarm system installed. We were too poor for it.

At that precise moment, I turned on the alarm, awakening the whole  neighbourhood. And I shouted at the top of my voice, “Pencuri! Pencuri! Thief! Thief!”

The neighbours rushed out. So did my parents. I could hear little Lassie barking in the kitchen.

I looked down at my parents (who were a floor below me) and shouted, “They’re trying to steal your van!”

Some neighbours rushed out with broomsticks in their hands. Aunty Kiran was caught in the act.

The rest was history. I smiled, took a last puff and walked a floor down and in to my room, into the brightly lit light.