NOTE: What if one day, you find a time machine, and you’re able to go back in time to change the five things in your life. What would they be? These are the five things I’ll change and correct in life. 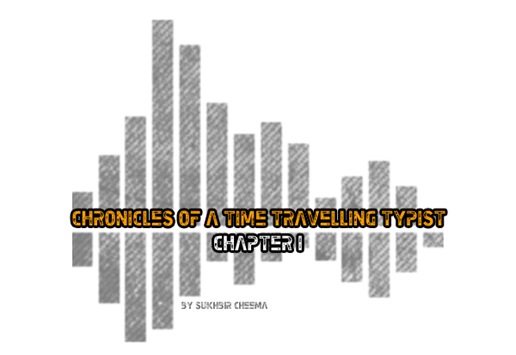 I slept like a baby throughout the night. I dreamt that I was in an open green field, with lots of sun flowers and I was running through the field, like a kid, holding a kite and the kite was high up in the sky.

And then I woke up.

I was in my room, on my bed. It was in the morning because I could hear the birds chirping outside, and the light from the sun was pouring into my room. The morning’s national anthem was playing from the television outside. My dad must be awake. So was my mum.

I looked around, there was no changes in my room except for a funny looking machine that looked like a typewriter. Except this one had intricate looking buttons and knobs instead of the usual keyboards. The words, “Time Machine” were on it.

I slowly walked towards it, half the time thinking to myself what on earth was this machine doing in my room? Maybe it was something my mum brought back home. Curiosity engulfed my soul and embraced me.

I touched the machine and I chanced upon a small note scribbled in black ink on the time machine. The note read; “Now is your chance to set things right. Press the black knob, type in the date, time and location of an event in your life you wish to change and then turn the black knob. Think carefully though, you can only change 5 events in your life.”

Must be some silly prank.

I went back to my bed, sat down and thought for a moment. Memories after memories started playing in my head. Where was I last night? What was I doing? And what’s a time machine doing in my room? But I couldn’t remember a thing.

I walked back to the time machine. Looked at it and thought to myself, that it might be a joke for it to be here. Maybe my friends were playing tricks with me again.

But for the benefit of the doubt, I turned the black knob and a tiny window appeared with dates. The dates ranged all the way back to the year I was born, 1986. I couldn’t type the dates after September 19th 1986. Which sort of made sense because I wasn’t really born then.

But just for the fun of it, i typed a date. “March the 19th 2010, 10 PM Behind Nivan’s house.” It was the date I got mugged. I lost RM 7k worth of money along with my handphone thanks to three motorcyclists who stopped my friend and I while I was sending him back from work.

I then turned the black knob and waited for something to happen. Something to take place. Like a whizzing light or something. But nothing happened.

This is dumb, i said to myself.

I went back to my bed, tried to sleep again but I couldn’t get myself to sleep. So I got up and opened my room door to go to the hall.

And that’s when I saw a blinding flash of light and I was zipped, no not zipped, sort of like transported to the night of the event that took place.

I was behind Nivan’s house, at the back. I checked my phone and it showed 10 PM. I felt something heavy in my back pocket.

It was a gun. A revolver. The kind that they use in the old cowboy films.

I looked around me and just infront of me was an alley that made way to the scene of the mugging that took place months earlier.

I walked down the hill. It was bizarre. I felt funny, excited and scared at the same time. The time machine works!

And just 200 meters away from me were a bunch of Indian boys. 3 of them to be exact. They were smoking. There were two motorcycles and they were talking away excitedly.

I bet they were planning on how to mug us. Wave of anger overcame me as I walked towards them.

I thought to myself, if I call the Police, the Police is not going to do anything. They would be in jail, maybe for a week or two, or maybe for a few months. Then they’ll be out and back to their old ways again. The best thing to do is to kill them like cockroaches. Pests of the society.

One of them nudged his friend as I came closer. All three of them observed as I slowly made my way towards them.

“Apa you mau?” One of them shouted at me.

I smiled, pointed my gun at them.

“Wow! Relek! Relek! Jangan marah!” His friend said as he tried moving back.

The first guy, the one who shouted at me, took out his pocket knife. The very same knife that he used to mug me.

I took out my gun and shot his friend dead.

He stood frozen, with the knife still in his hands.

His other friend, the third guy, tried to make the run for it. I shot him on the leg.

“You boleh faham English? You understand English?” I asked. “Saya punya Melayu tak bagus. My Malay’s not so good” I added.

“Good. You have a cigarette with you?”

“Yes.” He takes out a cigarette, lights it up for me.

“Thank you. Let’s sit over there.” I pointed to a brightly lit spot.

We went over to it, and sat at the edge of a drain.

“Tell me. Why do you guys enjoy sitting in dark spots? The government made lights so that you can see each other when you talk at night. Why the dark spot?” I asked.

He stammered, wiped sweat from his brow and then said, “Because we like it.”

He coughed. “Why don’t you smoke too? Relax.” I ordered him.

He picked out a cigarette, tried lighting it but his hands shook. So i took the lighter away from him and lit the cigarette for him.

“Why do you like the dark spots?” I asked him again.

“There must be a reason.”

I waited for answer. But he kept looking at his dead friends. I observed him, smiled and said, “Don’t worry about them. But tell me why?”

He kept silent and then said, “In the dark no one sees you.”

“In the dark no one sees you…” I repeated that sentence to myself, took a puff and tried to make sense of it.

There was silence and then I got up and said, “Do you watch the National Geographic channel?”

“N..no.” He sounded surprised at the sudden change of topic.

“What channels do you watch at home?”

I laughed. “You should watch National Geographic. The part where they show you how the lion hunts it’s prey down is interesting.” I took a puff.

“Do you know, that when the lions have hunted down their prey, they play around with it?”

“No really. It’s interesting.” I took a puff. “The lions, they plan, hunt down their prey, play around and then slowly take turns killing it.”

“What you guys are doing, are what the hyenas do. The prey is dead, and all you’re eating are the left overs. Do you know what difference it makes?”

“It makes a lot of difference. What you’re doing is killing people who’re already dead in heart and soul. Preying on innocent victims who’ve become paralyzed with their own problems. They’re already dead. But you make things worst for them.”

I took a puff and then said, “But do you know what I just did? I played around with you, smoked a cigarette and now I’m about to blow your fucking brains off.”

He stood up and tried punching me. I avoided his attack and shot him in the face.

He fell flat on his back. Smoke poured from my gun.

I heard a car coming. It was a Datsun. And I saw myself driving the car with Nivan.

I ran back to the spot where I came from and saw a round bright circle. I stepped into it and was back in my room.