I was having my haircut when Elton John’s Can You Feel the Love Tonight started playing on the radio and I burst out laughing.

The barber was taken aback. “Boss you okay?”

And through the mirror infront of me, I can see his face, looking at me weirdly. I stopped laughing and closed my eye to indicate to him to go on cutting my hair.

See, the thing is, the song reminds me of a very funny memory of myself when I was a kid. When I was around 13 years old.

There was a singing competition in school back in 1999 and I was munching on the burger I had bought from the canteen when I saw a poster of it. It was organised by the Music Club of the school.

Now, coming from an all boy’s school, the Music Club was known for two things:

a) Faggots (lots of them)

b) Snobbish bunch of students who think they’re Beethoven or some shit.

Ask anyone from St.Paul’s Institution and they’ll tell you that whatever I write here about the club is true.

Anyways back to my story. I went to the Music Club room and I was immediately welcomed by loud voices of very annoying individuals who were training their vocal chords.

They start at a low pitch, “O la la la la laaaaaa” And the pitch continues rising to a crescendo until everyone starts squeaking and that’s when you know they’ve reached their limits.

And the leader of the pack was the most, how do I put it.. faggotest of the faggot of them all (no offense to faggots).

Anyways I walked in and everyone stops singing. All eyes were on me. The head of the Music Club, walks to me hurriedly and says, “Yes?”

“Owhh….” he scrutinizes me up and down like I was an alien from the Planet Zaptar. “Okay. Sign this form.” And he hands me a white sheet of paper.

I filled it up and I asked him when was the competition and he said it’s exactly a week from now. All I got to do was bring a tape of the song I was going to sing and they would play it in the background.

“Easy peasy” I thought to myself. All I had to do was follow Elton John’s voice as a guide and I might just make it.

The day finally arrived and I walked in confidently with the cassette of the Lion King Soundtrack. I go to the head of the Music Club and told him that I was going to sing Can You Feel the Love Tonight.

He takes my tape and then asks me, “How come you’re not in your costume?”

I stare at him blankly, “I thought this was a singing competition”

“No. You should come with a costume to match the theme of the song.”

Fuck. I was doomed. I looked around and true enough, I saw a bunch of idiots in costumes. Some were wearing suits and ties and some form six girls were wearing ballet outfits and cheerleader costumes.

“You have approximately 30 minutes to find your costume or else you’re disqualified.” And he walks away in a huff leaving me standing there, the only one in my school uniform.

I went out of the room and sat by the drain wondering what to do as I watch the afternoon breeze play with the leaves of the plants nearby.

And that’s when it struck me!

Leaves! I’ll use leaves and twigs and make it my costume. They can’t disqualify me because Elton John specifically sang it for the Lion King movie and The Lion King movie is set in Africa. And in Africa there are wild animals and?? You guessed it. Leaves! Lots of them.

So I plucked a few leaves…

A few twigs here and there, rolled my school pants up to my knees and placed a few twigs on my head and shirt and used cellophane tape I borrowed from the library (I was a librarian back then so I had access to the equipment there) and glued some leaves on my face.

By the end of the day I looked like this: 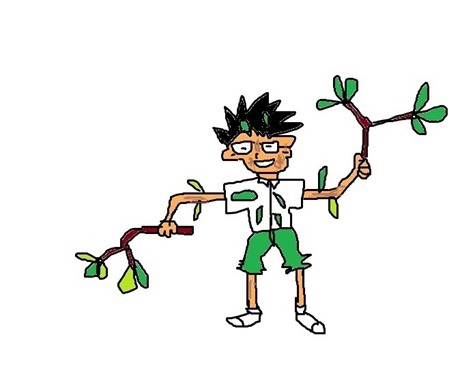 I was like.. some kind of jungle boy or some shit. But who cares! It fit the theme and I was dying to perform.

I even went to the extent of putting a little bit of mud on my face and hands to give the African feel to it.

I snuck back into the room and no one took notice of me because everyone were busy practicing by themselves. Some were closing their ears so that only they can hear their voices but the forget that others can hear it too.

My turn came. My name was announced.

“Please welcome, the next singer who’s going to perform Elton John’s Can You Feel the Love Tonight, Sukhbir Singh from 1 Felix!”

I took the mike from the assistant who was staring at me with bewilderment.

I turned around and I came face to face with a very silent audience. Everyone stared at me dumbfounded. Not a muscle moved. Everyone were staring at me with their mouths wide open.

And that’s when I realised I had overdone my “costume”.

I took hold of the mike and I nervously spoke into it, “H..hi everyone. I’m S..Sukhbir. And I’m gonna sing Elton John’s Can You Feel the Love Tonight.”

The song began (you should hit the play button and listen to the song while reading for added “affects/effects”). 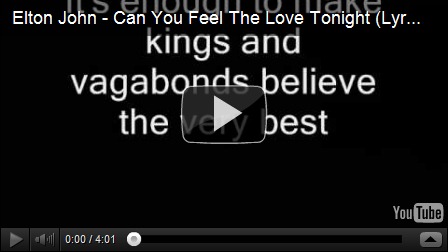 And I nervously sang into the mike. Missing a few tempos and rhythms here and there. I even went off tune during the high pitched part.

But I kept singing, swaying left to right, with a broken twig on my left hand, I waved it like as though I waved a flag. I imagined myself singing those patriotic songs you see on RTM 1 in the mornings sung by a bunch of people who swayed left to right waving the Malaysian flag.

I swore reading someone’s lips uttering the words, “What the f…?”

The audience was still frozen and many were still staring at me with their mouths wide open. And when the song ended, there was silence for a while and as I handed the mike back to the assistant, I could hear one or two awkward claps from the back.

The Music Club Leader took the mike and spoke into it, “P..please put your hands t..together for Sukhbir from 1 Felix.” He was still shell shocked.

I walked past the still shell shocked audience. Everyone stared at me with their open mouths.

I slumped back to my chair. Relieved. I finally did it!

I didn’t win anything that day apart from a few stares and some remarks. But I didn’t care. I wanted to sing. I didn’t want to sing because I wanted to win something. I just… wanted to sing. That’s it. Don’t ask me why. I always do stupid impulsive things like these because at that moment, at that time, at that second, I think and I feel it’s right.

I might regret the decision later on. But come to the think of it, it was worth it. Had it not been for that funny incident in my life, I would have lacked one funny story to tell you about my child hood.

Do I regret making a fool of myself infront of 50 faggots who wanted to be wannabe singers? Nope. Not one bit.

I had good fun singing.

As for the plants though, the gardener was furious the next morning when he found out his favorite Bougainvillea’s and Hibiscus trees partially destroyed.

Nope, he never found out the culprit till this day.

But I can bet you one thing though: Every single one of them faggots felt the love that night *evil laugh*.

3 thoughts on “Can You Feel the Love?”