The sun peeked through the dark morning clouds, its rays expanding to every corner of the world as two figures slowly mounted from their golden chariot and made their way to a small hill positioned strategically among the two factions, the Pandavas and the Kauravas. From there, as Arjuna stood on the hill, he could make out the vast army of the Kauravas amassing, led by their powerful general, his grand-uncle, the great Bhishma Pitamah. Arjuna’s eyes welled up with tears.

“Why do you cry, Arjuna?” the second figure, Krs’na, spoke.

“Ï cry because every face I see in this battlefield, are my loved ones. My kith and kin. My relatives. My friends. My blood.”

Krs’na placed his hands on Arjuna’s shoulder as Arjuna closed his eyes in anguish, tears slowly dropping on his cheeks. “Ï can’t do this Krs’na,” he said as he fell to the ground and started sobbing. “Ï can’t do this because they’re my loved ones. My family. I can’t bear to use my sword to slay them despite the terrible deeds that they had committed that ultimately led to this war,”

Krs’na, Arjuna’s charioteer slowly went on his knees to be on level grounds with Arjuna, rubbed away tears from Arjunas eyes and said, “At this moment, you don the uniform of a soldier. At this moment, that sheathed sword of yours begs for your enemies blood. Duty is a duty,”

“But what sort of duty is this? Killing my loved ones! Enough with this. I don’t want the kingdom. If begetting the kingdom through this war is the only means, then forget it. I don’t need it.”

Krs’na stood up and stared at the sun that was just being born on that day, far into the distant horizon. The winds blew and whispers of anger could be heard coming from the Kauravas section. “Do you hear yourself speak, O Friend?” Krs’na asked. “Do you hear the winds blow? They want to slit your throat and here you are, crying like a child, begging for the war to end. Are you truly from the warrior caste or were just pretending to be one?”

Hearing these words Arjuna rose and faced Krs’na. “Ï’m a warrior, but I won’t allow myself to fall prey to these emotions. I don’t want to kill or harm them anymore,”

“You don’t want to. But they do,” Krs’na retorted. “Your duty as a warrior is to stop the menace of evil doers who’re begging to be let into your kingdom. These people, who took away your kingdom through trickery are now oppressing your countrymen. If you don’t raise your sword to fight, then who would? Which is more sinful Arjuna, to blind an enemy or to remain blind to the plights of the oppressed?”

Arjuna understood Krs’na argument, and slowly came to his senses. However, the very idea of slaying his cousins in battle made him shudder in fear. “Krs’na, there was a time when I would have thoughts of slaying Duryodhana but now that the time has come, my hands shiver and my knees grow weak,”

Krs’na came closer to Arjuna and placed his hand on Arjuna’s shoulders. “It’s all a trickery of the mind. Don’t let your mind take control of you. Who are they really Arjuna? Have you ever asked yourself that question? Who really is the kith and kin, the grand uncle and the cousin and the friend and foe? Who?”

Krs’na continued, “Everything that you see now, the smell, taste, the scent, the feelings, these emotions, the wind, the sand, the friend and foe and even me, are but projections of yourself. In actual fact, there’s no death nor birth. There’s nothing but you. Infact, who really is Arjuna?”
“That’s my name,”Arjuna replied. Krs’na replied, “That’s right. A name given to your body. But what is this body? Is this body really and truly YOU? You are beyond that.”

“Ïf I am beyond the body, then why do I feel fear and sadness?” Arjuna asked.

“You feel it because these thoughts and illusions cloud your mind. Had you realised your true self, fear would never have struck your heart. At this point, you’re a soldier fighting for your cause. Your duty is to defend your land and claim what is yours. And then, once the war ends, you go home all weary and tired and sleep. What are you then? A prince. You wake up the next morning, you start working hard in amending resolutions and passing laws, you’re a ruler. Do you realise that you play many different roles in so many different situations? Sometimes a soldier, sometimes a prince and sometimes a ruler. Who are you really then? Who is this being who plays so many different roles and has various names? Who? Who are you really Arjuna?”

Arjuna stared at Krs’na, not knowing what to say. He asked himself, “Who am I?” He closed his eyes and kept asking the question earnestly as the wind blew and Krs’na patiently observed his good friend. Then, from the darkness, Arjuna found the answer.

Krs’na walked toward Arjuna’s chariot that was near the both of them. “Come my friend, at this moment, at this point, nothing is more important than upholding righteousness and you, you are the only one who can uphold it. If you fail, the Pandavas will lose the war and in the end, the Kauravas will prevail. They might be your kith and kin and relatives and once friends, but they had committed too much sin that mother earth begs them to be rid off. Come my friend, mount the chariot. There’s work to do, sound the conch, the sun has rose in the mountains beyond the horizon. I can feel its warmth rays touching my skin, blessing my armor. The war is about to begin. Blow the conch to signal the start of the war my friend!”

Arjuna mounted his chariot and blew his conch loud and hard. A deafening sound was heard, it sent shivers into the spine of Arjuna’s enemies, the Kauravas. Crows from the nearby forests flew and beasts in the forests ran helter skelter. And then, a loud roar was heard. The war had begun. 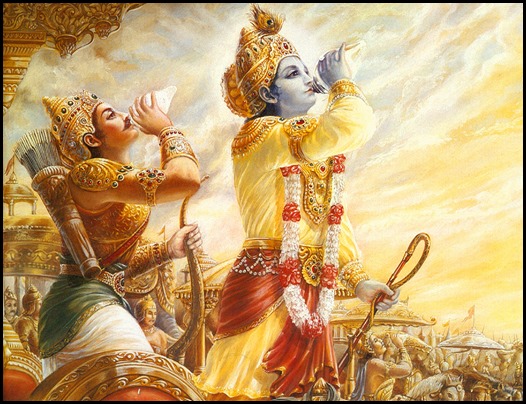 **NOTE: Apparently, the whole conversation between Krs’na and Arjuna only took 9 minutes. These 9 minute of conversations became what we now know as, the Bhagavath Geeta.