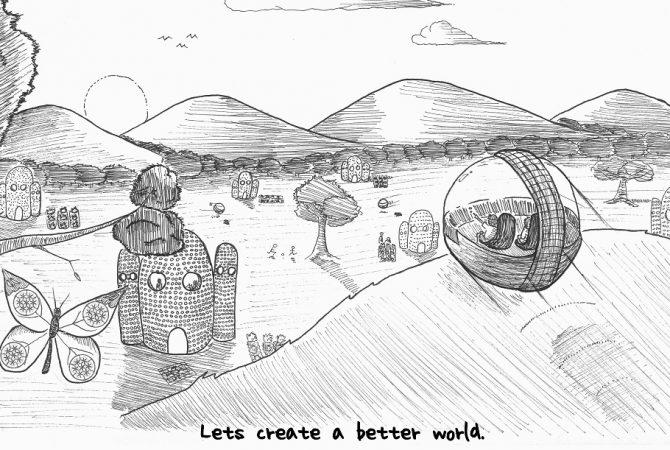 A page from my comic on press freedom, The Malaysian Solution

30 years from now, you and me will be seated with our grandchildren, sharing with them the journey which began with the historic Malaysian Tsunami of May 9, 2018.

It’s sinking in for many already that a mature check and balanced system is needed in a mature democratic nation, thus Malaysians voted a complacent Barisan Nasional out and chose Pakatan Harapan to prove its mettle despite the odds stacked heavily against them.

For a mature democracy to take place, there is a need for people to express themselves, their opinions, dissatisfaction, views and ideas without any repercussions or censorship based on the Malaysian Constitution. Pakatan Harapan’s mandate by the people is proof that oppressive laws and policies are archaic and primitive and they no longer have the power to influence the hearts and minds of the Malaysian people who’ve transcended fear itself. 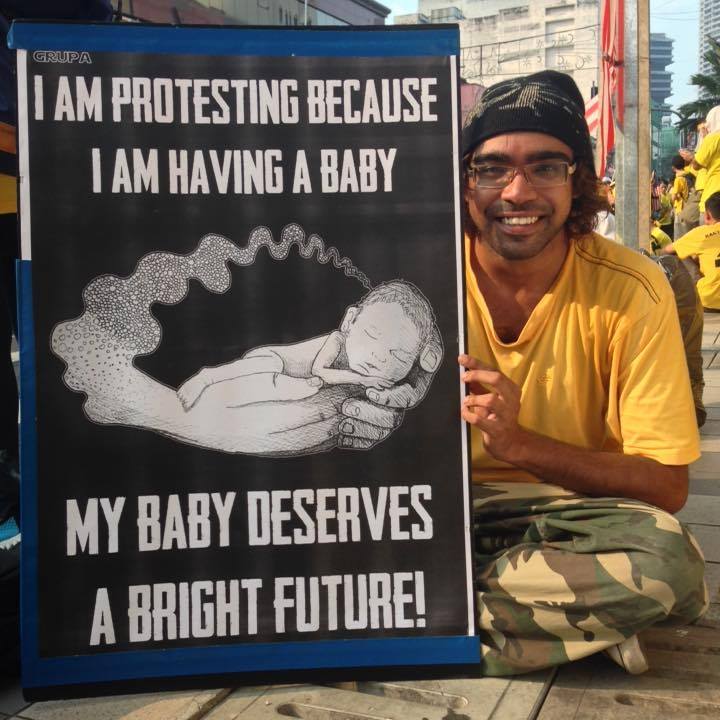 I will most definitely be showing my daughter this image when she grows up. Taken at the Bersih 4 rally of 2015.

With Barisan Nasional now at the Opposition end, there is room for the coalition to reformat and improve itself to be more down to earth, just, truthful, and honourable. In other words everything Malaysia stands for.

We must remember, Barisan Nasional was a terrible re-branding of the former, Parti Perikatan – the very same coalition whose founding fathers played an instrumental role in the struggle for Malaysia’s independence. Both sides must honour this if we are to develope as a mature society.

The media plays an important documentative, fact checking, idea spurring role for the growth of a nation. It MUST be truthful, fair and balanced in the check and balance system of a democratic country such as Malaysia. All sides of the political and activism spectrums must be heard. 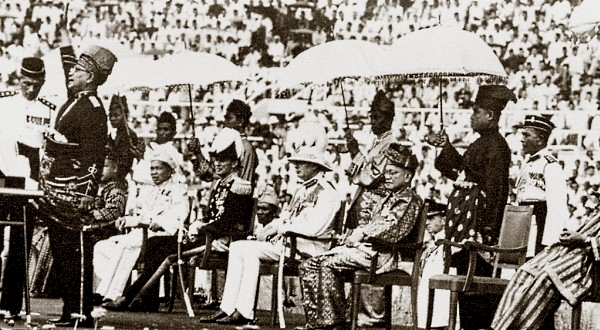 My father was 15 when Malaya got its independence. 61 years later, I can relate with what he experienced. Image credit mysinchew.com

It all goes down to the members of the various political parties who must learn to be more mature, transparent and accountable if they are to be given a mandate. So long as its members did not break the laws, have been transparent, down to earth, hardworking, and met the targets of their manifestos, the people will naturally give them a mandate.

A mature and open discussion space allows mature and intelligent leaders to rise and take over the helms of the nation. It also allows for more intelligent debates and discussions on the state of affairs. Especially in the rural areas. 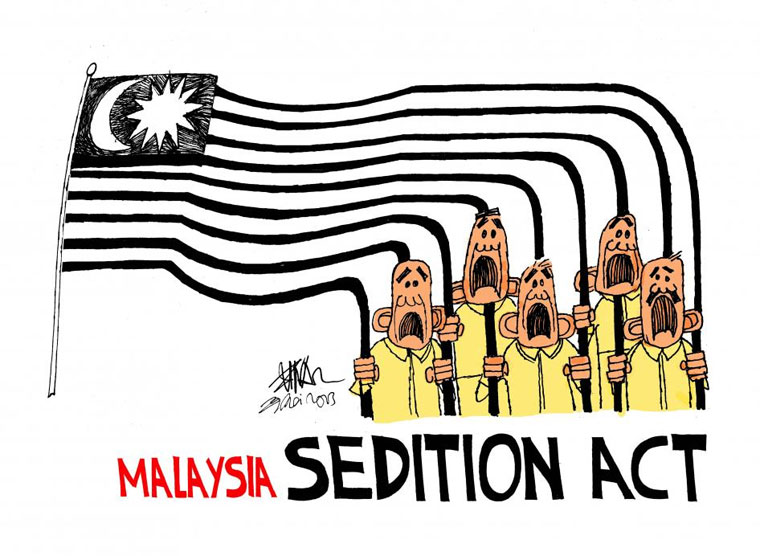 The people of this country can truly grow if everyone provides their thoughts, opinions and ideas in the management of the nation regardless of their differences, political ideologies, philosophies and religious outlooks without any fear. We need to create a climate of conducive communication; listening, understanding and speaking freely.

What this country direly require are mature Malaysians with leadership qualities. In order to do so, we as Malaysians must first learn to listen to one another out in a calm, mature and civil fashion and reply in the same manner. It first has to be demonstrated in the parliament by both sides from now on.

WAGES OF MEDIA PERSONNEL AND SUSTAINABILITY OF MEDIA ORGANISATIONS 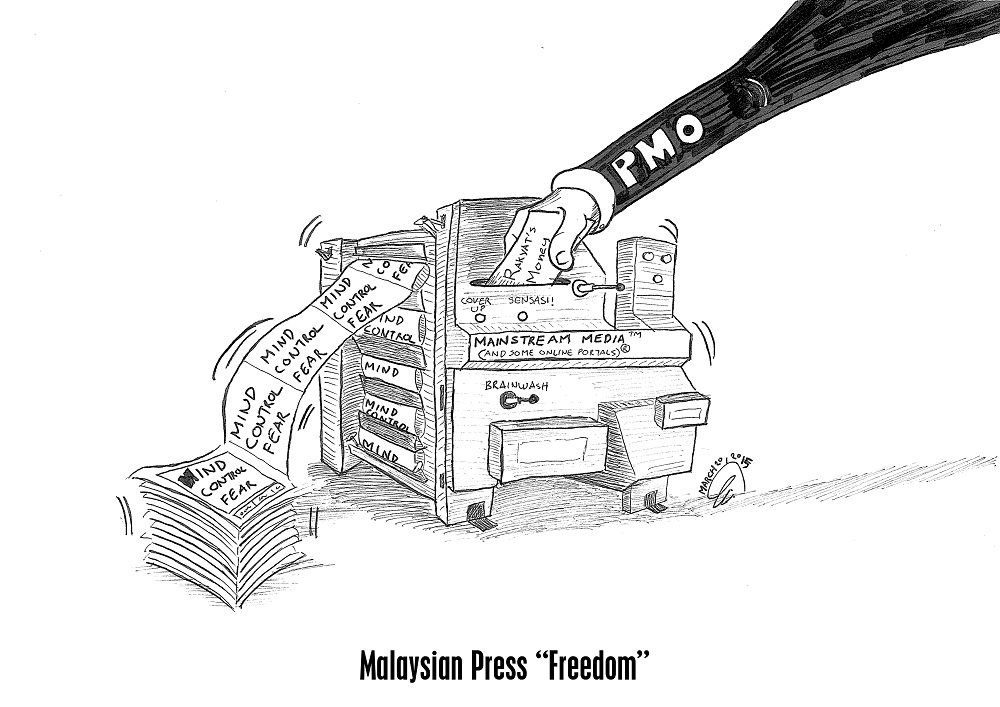 The state of affairs then just a few days ago. Would the status quo remain? This cartoon is part of The Malaysian Solution, a collection of cartoons I drew on a Malaysian press freedom.

There is a conundrum, however, as the media that is usually independent struggles financially.

During Barisan Nasional’s rule, it were the BN affiliated people who had a stake in many of the mainstream media organisations which did the bidding of its political masters by serving as propaganda machineries through “Must Cover, Must Use” news assignments. Journalists were told to write the news in a certain way. They were instructed to put words into the mouths of people and sensationalise issues. 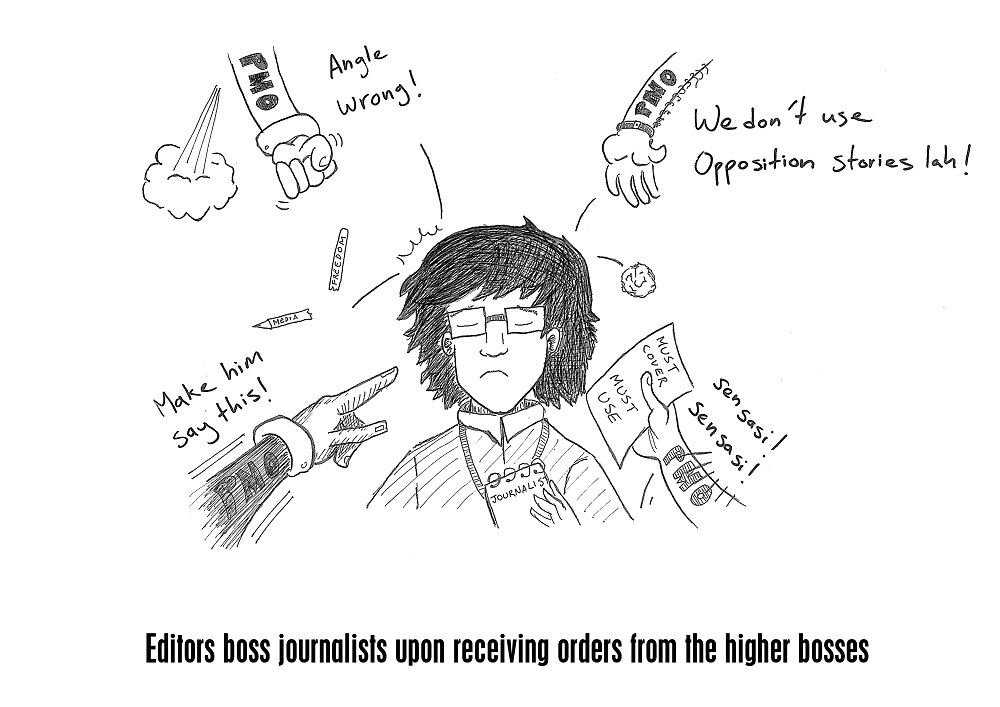 Stop being bossy. You do your job, we do our job. The Malaysian Solution.

The idea among journalists that if I serve (insert media organisation) means that I serve (insert political party) should be thrown into the bin. Journalists must now have the integrity and pro-activeness to write the news as they see and hear it and must be held accountable if they’re found to be influenced through cash handouts – a practise made rampant under Barisan Nasional’s misrule.

There is ofcourse the risk of media organisations to be influenced by foreign and/or local financial backers with ulterior motives.

Here is where I propose to the newly minted Pakatan Harapan government to look into a conducive financially sustainable approach for both the mainstream media and digital media so that the country’s journalism standards meet the ones set by Transparency International. I also hope journalists obtain better pay to prevent them from succumbing to cash handouts which is strictly against the journalism ethics. 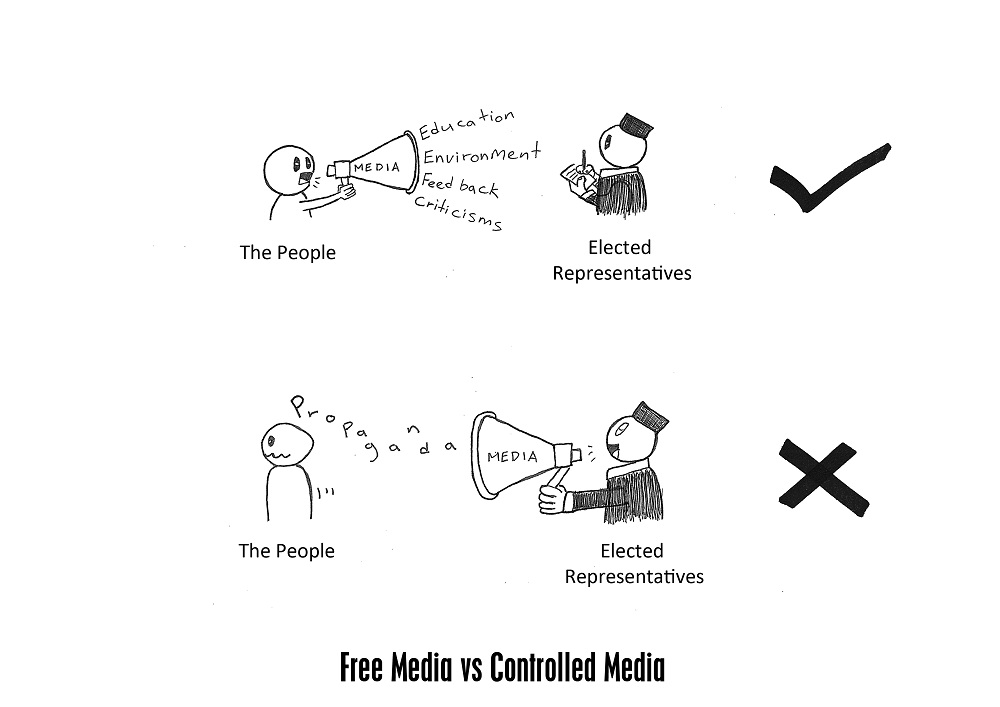 One of the reasons Barisan Nasional lost its mandate. A page from The Malaysian Solution.

Since Mahathir has pledged to follow the rule of law, his government must stick to this and undo the oppressive policies of the past such as the Sedition Act, the Printing Presses and Publication Act, National Security Council (NSC) Act, and the Anti Fake News Bill. It was these policies which saw my wife, who was a month shy to giving birth to my two-year-old daughter jobless when The Malaysian Insider closed shop in March 2016.

We survived the dark days when I immediately gathered my wits and sold online digital copies of my comic on press freedom which, ironically, is a response to Mahathir’s The Malay Dilemma. It was through the monies donated from friends and well-wishers, I managed to pay the hospital for their services rendered during my little girl’s birth. 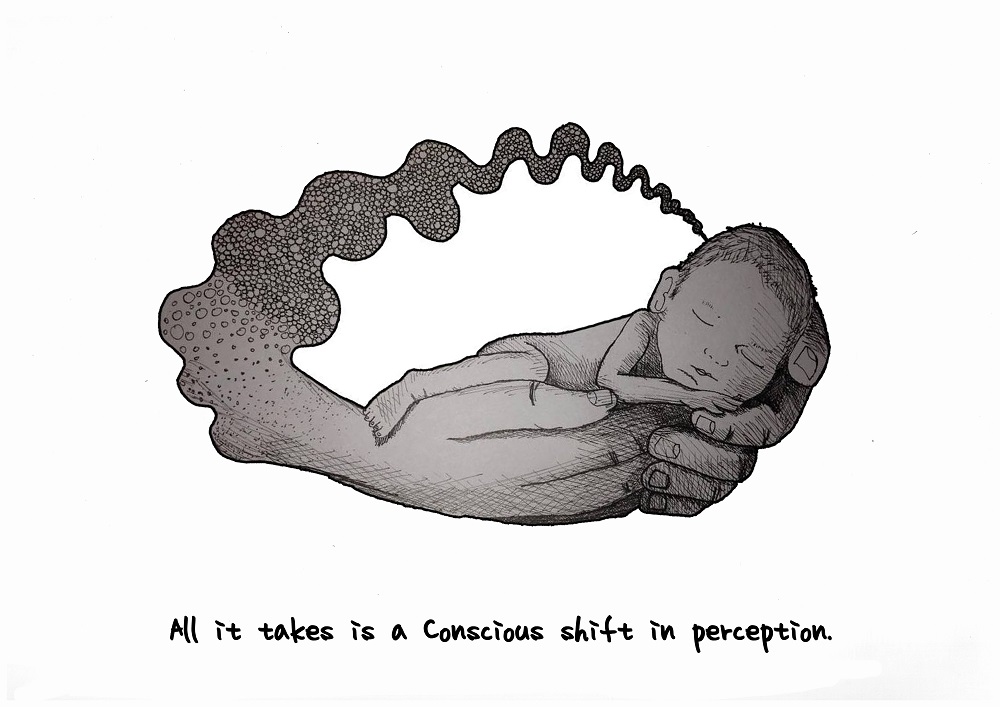 Nurul, we are all co-creators of this reality. The power is here in the NOW.

I named the comic, The Malaysian Solution. I drew this comic much earlier in 2015 when I quit The Rakyat Post. In this comic, I used Anwar Ibrahim’s imprisonment as an example of the evils of manipulation of the people’s mind through dangerous distortions and perversion of truth.

Malaysians can stand to reason and have the maturity to form their own opinion as many are now intelligent and enlightened. So for media organisations to sustain itself, they should never be forced to insult the intelligence of the people.

CREATING A WISE AND ENLIGHTENED MALAYSIA 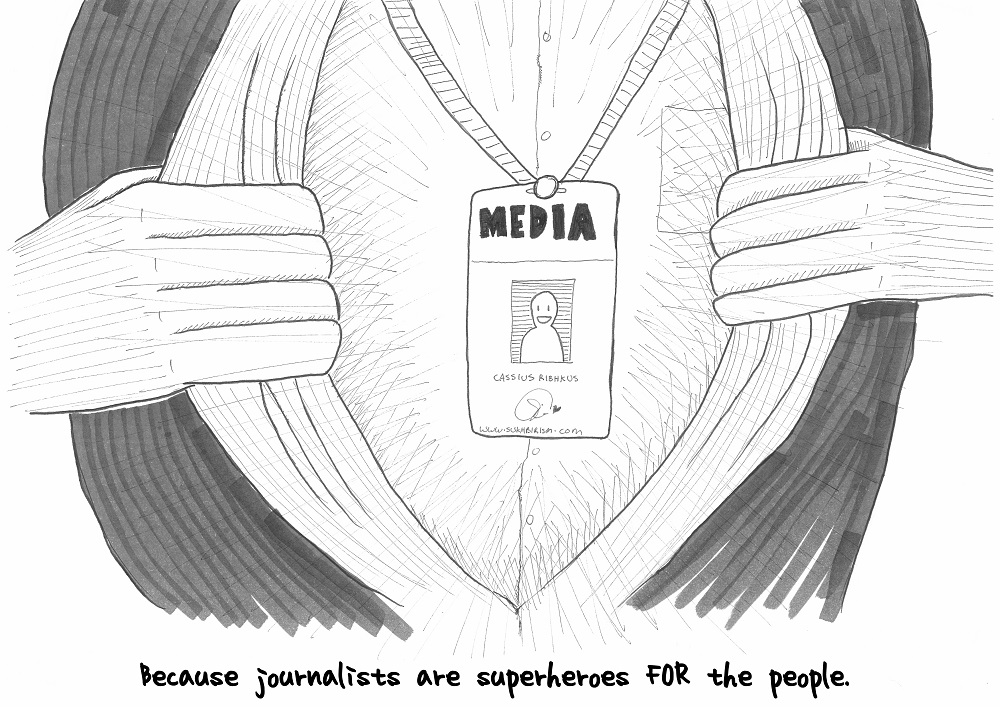 Superman works as a journalist. This in itself says alot. The Malaysian Solution.

I share the same aspiration as Mahathir, his famous Vision 2020. I grew up drawing flying cars back in my school going days and I’m sure many Malaysians experienced the same.

In the following pages of my comic, I drew a possibility of a reality where freeing the space for people to form opinions allows them to elect quality lawmakers into the august house of parliament where there is a high chance to fix problems at the global level such as the removal of fuel powered vehicles. In my comic, the government works in tandem with non-governmental organisations and companies to research and develop the AGSPOV (Anti-Gravity Solar Powered Vehicle) which is capable of travelling on any surface.

It saves cost, does not harm the environment and best part, driving it would feel like you’re in a Star Wars film! 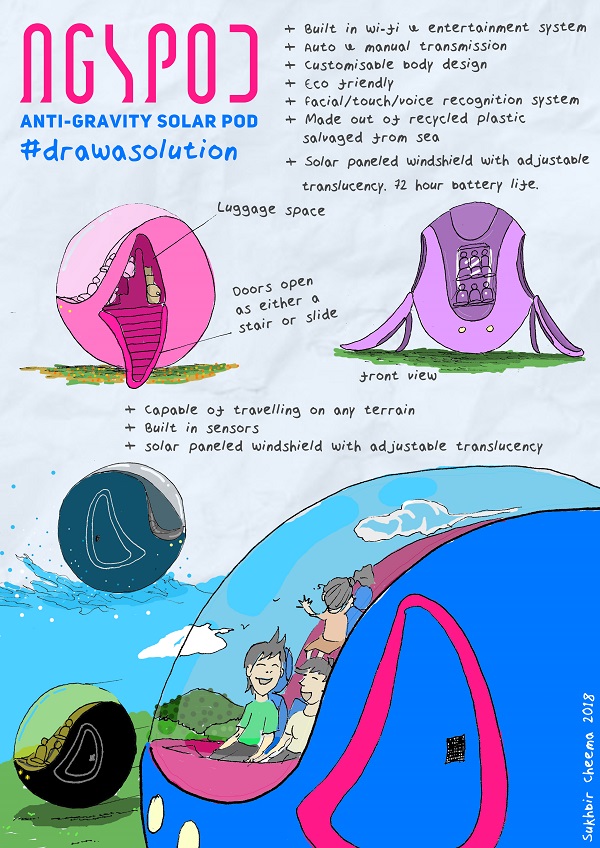 I want to see such advancements! These are ideas, just as Vision 2020 was. However, since May 9, 2018, anything is possible from now on.

In order to turn the artworks that we drew in our classrooms during the 90’s a reality, Pakatan Harapan must meet with all media organisations, the radio operators, deejays, the television owners, cameramen, photographers, to TV hosts, to political cartoonists, media activists, to editors, and writers of digital content websites and blogs to fine tune the economic policies when it comes to managing the media. The key word here is “lawful” or Halal as my Muslim friends would say it.

CHANGING THE PERSPECTIVE ON THE WORD “HALAL” 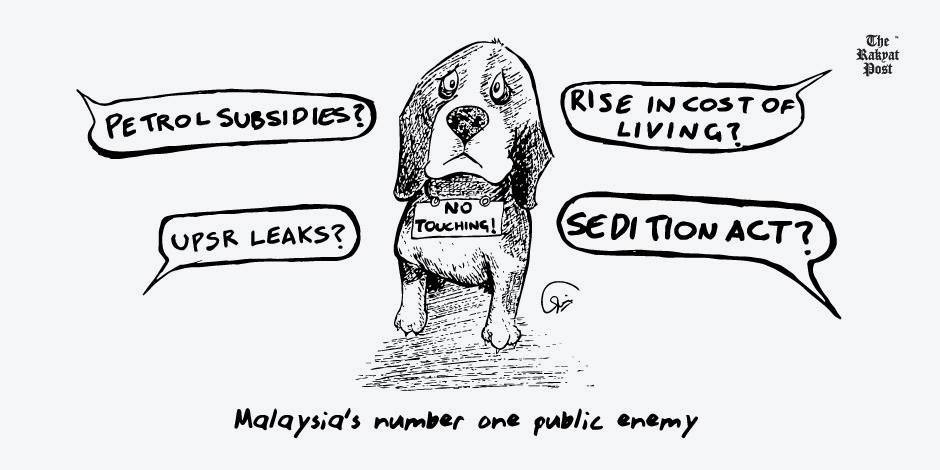 Correction, the number one enemies are the corrupt pigs. A cartoon I drew during my time at The Rakyat Post.

The events of this week has allowed a shift in perspective on this word which sadly has been reduced to a mere sticker labels on food packaging, water bottles and household pets. The Malays have a beautiful saying, “Gaji kena halal.” Many Non Muslims also agree with this and this is precisely why we joined forces to boot Najib out.

I used to work with The New Straits Times (2012-2014) where many news-pieces I wrote never saw the light of day. I quit as it was not Halal to me i.e. the management of the organisation did not practise the true principles of journalism.

I joined The Rakyat Post, thinking that it was a fair and balanced news website as it had claimed in the same year. There, from 2014-2015, I served as a reporter and cartoonist. During the one year, many of my cartoons were brought down. I was told to redraw cartoons. When Tuan Guru Nik Aziz passed on, I drew a cartoon of Karpal Singh hugging the former in heaven as a show of solidarity. The cartoon was not used. I then uploaded it on my Facebook page. The cartoon was then picked up and uploaded by Facebook page Negara-Ku. It drew the ire of ISMA. 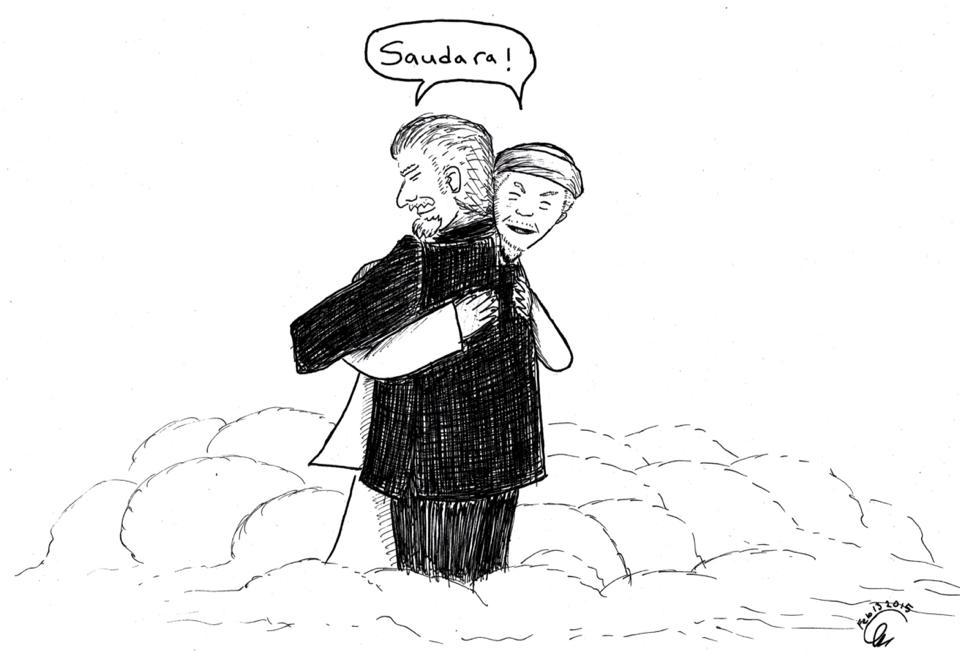 I can now openly say I was the cartoonist behind this cartoon.

When Anwar Ibrahim was imprisoned in a non Halal manner in 2015, I expressed myself by drawing a toy gavel with the words, “For Sale”. My editor declined to upload it and said I was idealistic. That was my last straw and I quit out of demotivation. 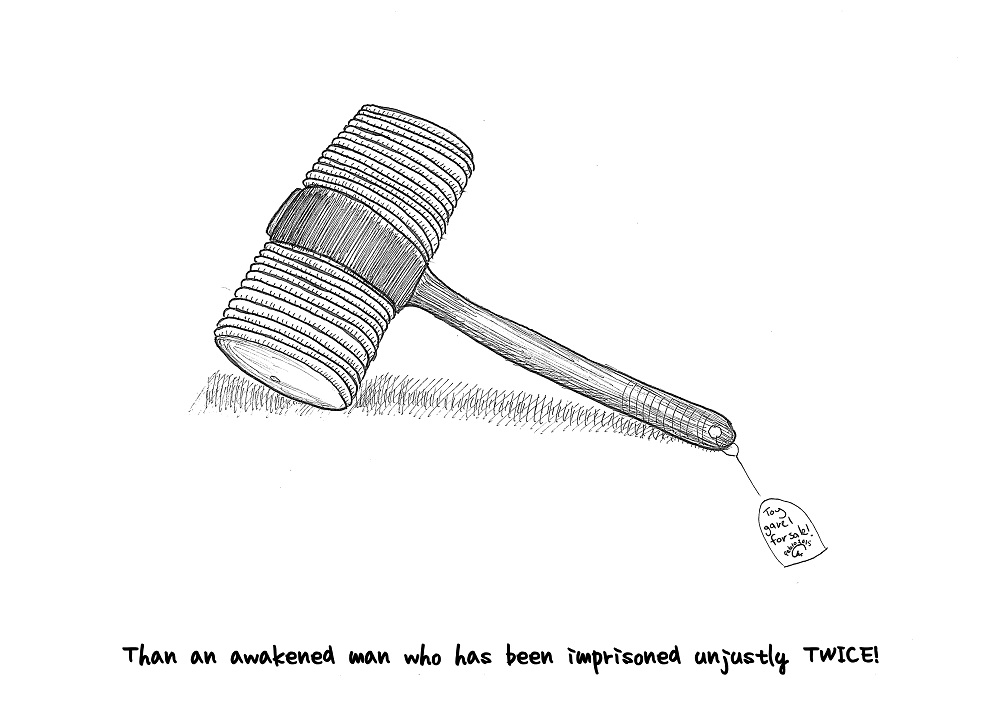 The cartoon was then added on to The Malaysian Solution.

Several months later, the news portal suddenly closed shop during the wake of the 1MDB Scandal. Here is where I urge the Pakatan Harapan to look into the sudden closure of The Rakyat Post which saw many of my former colleagues jobless without the pre-requisite two months of notice. Some had to eke out a living as Grab and Uber drivers. Mysteriously, the news-portal resurfaced and remained active again without the knowledge of the former staff who were still not paid their salaries.

Tell me, is this Halal? To Malaysians like me, it is not. We must do away with such perversions from now on.

CREATING A MALAYSIAN REALITY, ONE IDEA AT A TIME 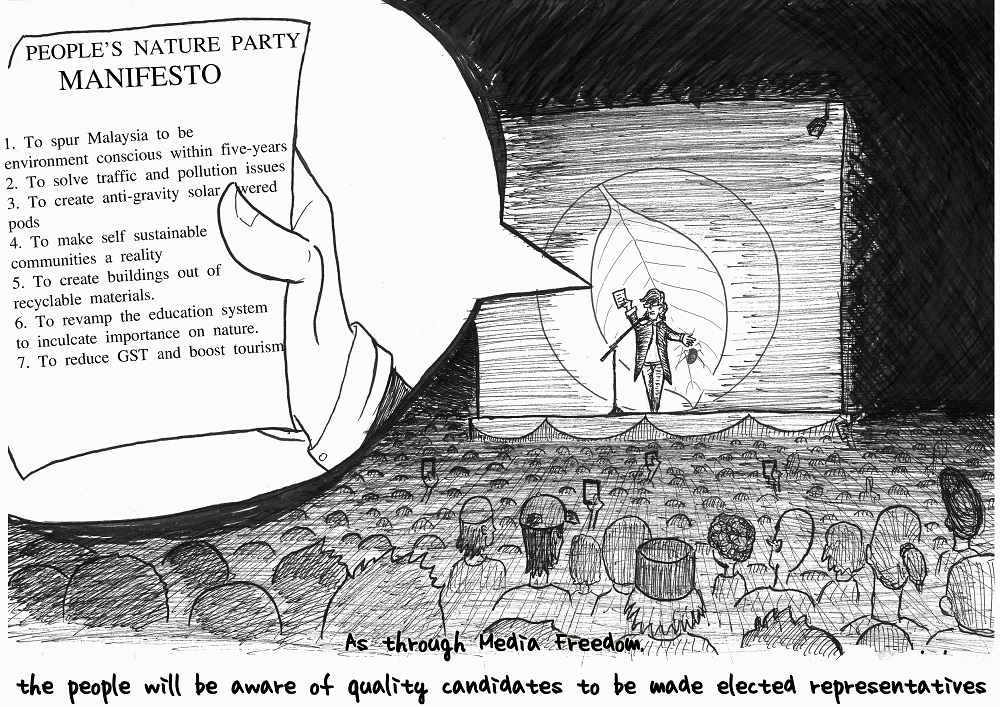 Malaysia needs fresh ideas to nurture itself and grow. The Malaysian Solution.

For a mature and progressive Malaysia, we require idealistic minds who are courageous to share their feelings and thoughts. The opening up of spaces for people to share their thoughts, grouses, feelings and views, feedback and criticisms maturely allows us to be a role model country in this region and this world.

A tiny nation of only 30 million with people from all colours, shapes and sizes, working for the betterment of each other. I want Malaysia to be a role model to everyone. However, it has to start today by celebrating the diversity of ideas.

We proved it to the world on May 9. Now, you must prove it to us. I’m giving Pakatan Harapan two terms.

And perhaps more if all of you do a swell job. 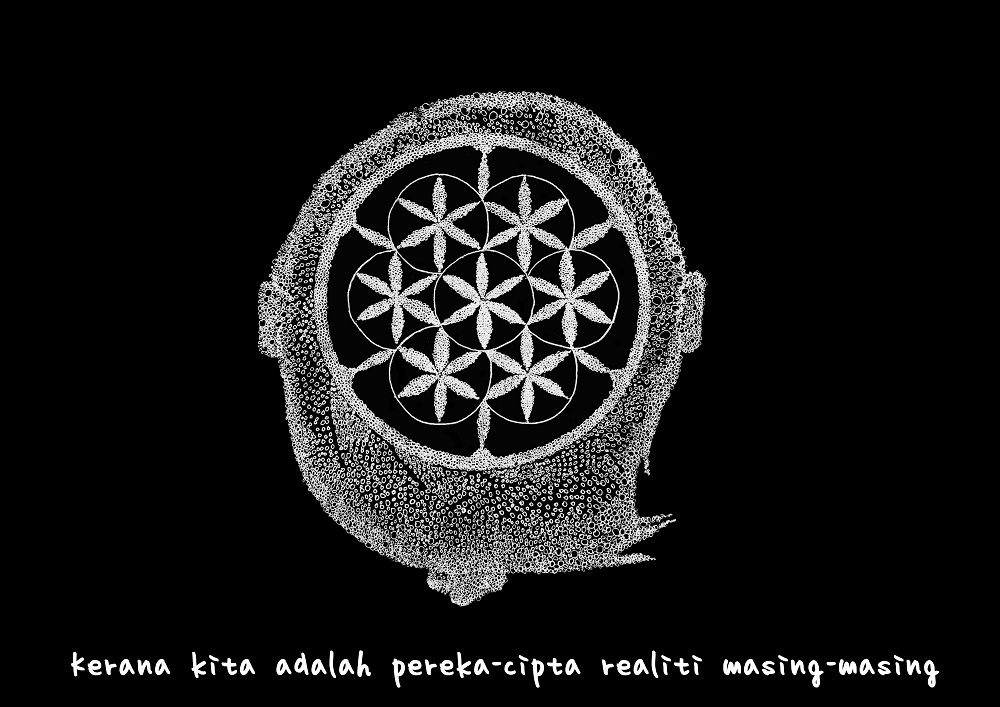