Sitting before me was an old man, 75-years of age, with tubes inserted on his right hand to allow drips and medication to flow through. It was a surprising sight because this man, was a former Criminal Investigation Department (CID) Chief, Tan Sri Zaman Khan who was instrumental in tracking down Malaysia’s then most wanted criminal, the notorious Bentong Kali.

The first question he asked me as I stepped into the ward was, "Hey, can you teach me how to use Twitter?"

Still young at heart despite his age, he gave out an aura of wisdom and experience.

It all started off with covering the Highland Towers anniversary spotlight assignment which was given to me by my editors. I was required to interview various people who somehow had an involvement in that tragic disaster that claimed the lives of 48 people back in Dec 11, 1993.

I prod him various questions about the incident, and for a man of his age, he seemed strong at will and heart. Highland Towers did shook him, but what shook him even more was one incident that remained ever fresh in his memory.

"It was the Japan plane crash incident of 1977 that opened my eyes." he said as he recalled that moment.

"I walked through the rubble of the plane, there was fire and people were screaming for help. The whole plane was destroyed and parts of it was strewn on top of a hill nearby the Subang Airport."

"I rushed in with my men, asking every survivor we came across if they needed help." he said as he took a deep breath and then continued, "We came across these Japanese survivors. A group of them and you could see they were visibly shocked but the told us they were fine and that there were few more others up on the hill in need of our help."

I listened and jot down everything Zaman Khan said, my trustee recorder recording his tale away on the ward table next to him.

"As we climbed the hill further, I saw this Caucasian man, who was terribly injured. He had broken his back. I went to him and asked, "Are you alright, sir?" he replied, "I’m fine, but I hear people crying for help further up the hill. They need you more.""

There was silence as Tan Sri closed his eyes, probably recalling that moment. He then broke the silence.

"Did what Tan Sri?" I asked stupidly.

"I looked into his eyes, he was in pain and yet, despite the pain, I don’t know how or where he found the courage and power to tell me to go further up the hill to help the others despite his predicament. Amazing.."

"I’ll never forget that man." he said as he took a deep breath.

I then asked him, "So.. you’ve witnessed almost all forms of incidences in Malaysia. In your opinion, what do you think was the lesson from all the experiences you’ve had experienced throughout your stint?"

He replied slowly, "I believe life is already planned. But you got to do the hardwork in ensuring the plan that was set, goes well. Filling in the little details of the plans. Making that "plan" a perfect one. That’s life."

I ended the interview by wishing him best of luck and as I walked out of the ward, I couldn’t help but notice, the way he spoke and thought was exactly like my father. What a humble soul. 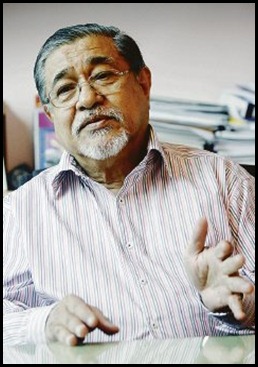