When Bala told me about it, I just took it with a pinch of salt. Yet somehow, through the way he explained to me about the movie and said, “You will feel the story and relate to the character more than me because you’ve gone through it. It’ll open your eyes” I thought maybe I’ll give a shot at it.

That was last Sunday and I have to admit, I’ve been feeling like shit lately. It all started when I asked Bala questions about why aren’t we getting what we want in love. Why are we so hopeless in it? Why after discovering a girl, she seems so beautiful at first and you have many things in common, she leads you on and just when you’re about to jump in for her, she pulls the plug, and shuts you off like a television?

That’s when he told me to watch 500 Days of Summer. When I heard the title of the movie, I rolled my eyes and scoffed at it. It sounded like a chic flick. But Bala was adamant. He said I must and have to watch the movie.

So I got back home that night and downloaded the movie. By the next day the movie was fully downloaded but due to the recent busy schedule, I only got to watch it today.

The movie gave me goosebumps. I had flashes of thoughts and memories of my exs and the girls whom I’ve loved.

The scary part was, I felt in an ironic way, that movie was about me. I could relate to it somehow. That’s how I was in the movie. Hopelessly in love.

If there is ever a movie out there that best represents me, I would say this is it. And to you guys hopelessly in love (or feeling depressed about it), watch this movie. It’ll open your eyes, trust me. 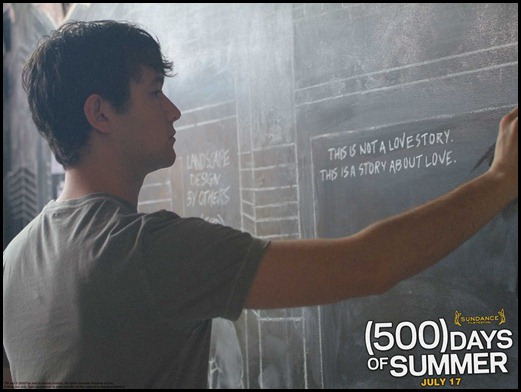 1 thought on “An Eye Opener”