It all started last night, after I had a smoke with Rvind and Black that both of them advised me to get my knee checked because I was limping like a Thai whore with a bad Hemorrhoid infection.

No I’ve got no Hemorrhoid infection but I busted my knee while playing futsal.

Being the ever diligent and wonderful friend (pfft yeah right) I decided to get my knee checked. But by having a hearty breakfast with ciggies at Salmah Bheevi’s first ofcourse. 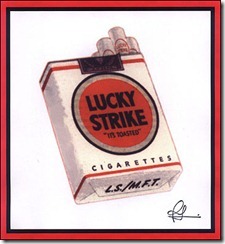 Don’t ask me why. I suppose I was feeling lucky.

Or probably because I watched Forrest Gump last night and I remember seeing the US soldiers in Vietnam smoking them.

The funny thing about these ciggies is that there’s no filter at the end. Because when I opened the box, the ciggies had two “fronts”. There was no filter. And it felt weird. I felt… cheated. How am I supposed to smoke this??

I decided to give it a go and lighted one up. And that’s when I realised why they call these the “Luckies”. You feel extremely confident. I don’t know maybe it’s me, or maybe it’s the sun (I have been a vampire lately) or probably driving in the Datsun on such a beautiful and sunny weather, I felt great. It felt like smoking weed because the sticks looked like a joint. But not as puffy or “carrot top” looking.

The kick was there ofcourse albeit the constant spitting out sessions because the tobacco gets into your mouth (no filters remember?)

I ate my breakfast, paid up, got to my Datsun, lighted another one up and I was singing Here Comes the Sun all the way to the hospital.

Waited for an hour for the doctor though…

My number flashed on the screen, and I knocked the door and went in.

I walked in and I saw this smoking hot doctor, with a ponytail, amazing beautiful eyes, she’s wearing this white doctor coat with her cleavage revealed slightly, ever so teasingly.

She looks at my name card and says, “Hi Sukhbir, how are you?” She had the sexiest voice ever.

I thought for a bit and then I remembered, “Owh I injured myself playing futsal and busted my knee.”

“I always like men who play sports. They’re so…” She purses her lips and thinks for a bit and then her eye meets mine and she says, “sexy.”

I’m sorry but the above conversation or scenario didn’t happen or take place. I’m just doing some creative writing. But this is how it ACTUALLY took place:

I was waiting for the doctor’s appointment and my number flashed on the screen.

I walked in and I realised I had not knocked on the door before entering, I proceeded to step out, knock the door and walk in.

“Morning.” The doctor was a Malay woman, probably in her late 40’s and she was wearing a tudung and I couldn’t see her face because she had a mask on (the ones doctor’s wear for surgeries).

“Good for you. What’s your problem?”

“I busted my knee during futsal and I –” she doesn’t listen to what I say and instead she checks my knee, wriggles it about and then says, “Painkillers, a bandage, an ointment and no futsal for a week.” and she scribbles something on my card.

“What? For a knee? You’re not Steven Gerard.”

I stare at my knee and then I asked her, “What if the swelling persists?”

“Then you come back and we shall see what we can do.” Something told me she smiled. Because her eyes became all tiny and squinty. Or probably she was getting annoyed at me so she gave that “squinty look”.

“Alright.” I stand up. “Do I get to hold the hospital card?”

“No. Let the hospital hold it.”

There was a moment of pause. “What if they lose it?”

She looks at me, “Mr Sukhbir, I’ve got many other patients waiting outside. You’re wasting my time.”

So I walk to the other counter to collect my medications. I limped to be exact. I felt annoyed that people were looking at me weirdly. But then it’s probably two things:

a) The way I limp is funny

But I didn’t care. It’s good to be in a limelight once in a while even if it means being in a hospital surrounded by sick depressed people. Atleast they get to laugh and get entertained while looking at me limp. Hey, laughter’s the best medicine ay!

I collected my medication and the Chinese dude at the counter spelt my name wrongly on the medicine packet. “Mr Skhhu”

I check the ointment and he spelt my name wrongly again “Mr Skhir sihfngjdnd” I don’t blame him. They don’t call it the “doctor’s handwriting” for a reason.

“Take them when necessary.” He passed me the painkillers.

I got confused. “Necessary as in when I’m in pain right?”

“I’m in pain constantly. Do I take it often?”

“No. There’s a daily dosage. See.” He points to the number written on the medicine packet.

“Have fun and break a leg.” and he winks at me.

I limped out of the hospital with three words on my mind, “What the fuck??”

So yeah, I’m back home. I’m gonna apply the ointment they gave and take some painkillers and bandage my leg. What a waste of my time..

2 thoughts on “A Trip to the Hospital”