Everyone, yesterday I started writing like crazy. Started at 4 in the evening and went on writing until 12 in the night.

I’ve decided to turn it into a novel. So ladies and gentlemen, here’s a preview of what’s to come in the future. Do give me your feedbacks and criticism. Let me know how i can improve the novel.

I’m looking at May or June for it to be published, but I don’t want to rush either. So i’m just taking my time.

So here it is, the first chapter of A Cup for the Martians:

A CUP FOR THE MARTIANS CHAPTER 1: DESCRIBING MYSELF 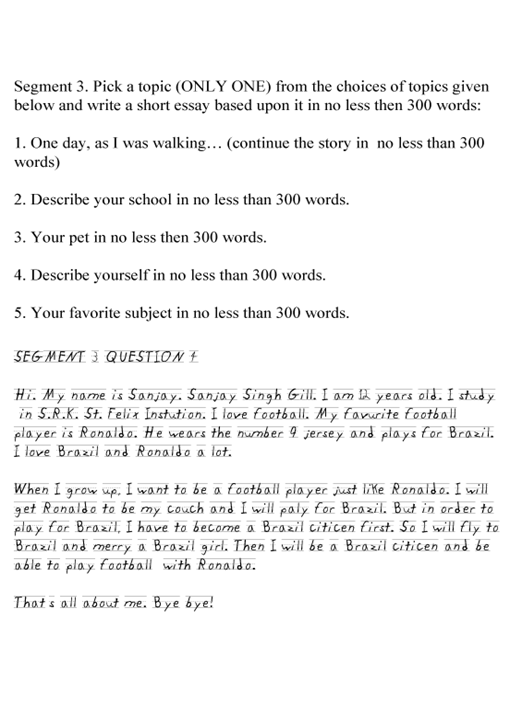 I was never really a fan of essays. Essays made me feel like throwing up. And that was the reason why I dreaded the composition segment of the English paper. But I loved the Segment 3 because this was the only segment which gave you a choice from 5 questions. From that 5 questions, you have to choose one, which is fine with me compared to the previous segments that only have one choice of question and that you HAVE to answer.

I suppose, whoever who invented this segment is a lover of choices. I guess he was spoiled by choices. Choices aroused him. Choices inspired him. I love choices too.

Let’s take a look at that monthly test paper above. Question 1 required the students to complete a story which was left hanging. I think that’s something utterly stupid to be done. How can you leave a story left hanging like that? I’m never really good in continuing stories so I decided to abandon that question.

Question 2 was about describing your school. I hate school and I hate describing things. So I left that as well.

Question 3 was about your pet. I had no pet and mum would kill me and turn me into chutney for dinner had I brought one home. I love anything that’s warm, cuddly and furry. But mum never really let me have a pet. So I didn’t choose that question too.

So in the end, I chose Question 4. Despite the spelling mistakes here and there, I fared well for English and managed to get 86 for English that month.

12 years later, I never really became a football player or married a hot Brazilian for that matter. Ronaldo was no longer the starlet of Brazil that we knew back in 98. If you ask anyone on the streets, who’s Ronaldo. They would reply, “Manchester United’s Cristiano Ronaldo”

I guess everyone had their glory days.

It’s true what the saying says, “Nothing’s permanent. Everything changes” And I believe every bit in that.

If that very same test paper was given to me now, here is exactly how I would answer it:

My name Sanjay Singh Gill @ Sam and I work at Technical Illusions.Co. I work as an IT support whereby I support and guide hotel staffs or guests who have internet related connectivity problems.

I graduated with a Diploma in IT at F.O.O.L.S (Free Overseas Official London School) and I earn RM 1500 a month which is not really enough because of the rise of travel fares.

My company is located at Bukit Damansara and I travel frequently from Seremban (mum prefers me traveling rather than staying in KL because it’s expensive. I guess she has a point).

In a month, I spend RM 532 for traveling to work alone.

Now, I’m not complaining. I would be happy even if I had RM 200 a month to spend but if you have a girlfriend like Aisyah, you can kiss all the money you have goodbye.

Women, I realized, are the second most influential things to a yawn.

So there, RM 400 is spent on Aisyah’s Prada boots.

This is my life routine:

If I’m lucky (which most of the time I’m not) I have to stand in queue (a bloody long queue for that matter) for the 6.30 pm Seremban bus.

I board the 6.30 pm bus often times stinking from head to toe and sitting next to a stinking passenger who often time’s perverted or snoring or farting or talking loudly over the phone in Thai.

I reach home only at 8.30 pm thanks to the after work traffic.

Saturdays and Sundays are the only luxury days which I spend accompanying mum to the Gurdwara and meeting my friends for a cup of tea at the Mamak.

That’s exactly how I would describe myself if that same test paper was handed to me. And trust me, I would obtain full marks for it because a) It didn’t have spelling mistakes this time and b) I described myself pretty well.

I realized, the biggest enemy of life is time. Second is money.

When I think about it, this reminds me of the cartoons where they have two bad guys. The main bad guy is the ultimate bad guy like the one in Power Rangers, Lord Zedd and one of his henchmen is money like Ivan Ooze.

I used to enjoy watching the original Power Rangers. Cartoons are not like what they used to be.

I used to enjoy watching the original Power RaThese days cartoons are created for fame and money purposes not for the sake of entertaining a bunch of kids.

So yes, back to time and money. The two of them hate me to the core.

I also hate it when someone gives you something to do and end their order by saying, “You have 10 minutes to finish this or 1 day to finish this”

My boss says it often. And often times he would further end his sentences by saying, “Or else…” and he gives you this straight face that says, “You will be fucked if you don’t complete this assignment.”

I’m a slave to time and money. And work as well.

Sometimes, when I sit in the bus, I ponder to myself, what’s the point in living when all we do is just travel to and fro to work every day.

But this is life. Might as well just get on with it.