After much contemplation following string of questions posed by many individuals concerning the Malaysia Independent Animal Rescue (MIAR) and its president, Puspa Rani, I feel it is high time I too explain myself.

Yes, I am the very same journalist who wrote an expose on Puspa who was alleged to have had misappropriated a sum close to RM400,000 from the non-governmental organisation (NGO). I have heard from a mutual friend of mine, who was also a former volunteer of MIAR on such allegations back in May 2014.

Back then, I had quit my former company, The New Straits Times and was taking a breather. This friend of mine had relayed her experiences and requested me to write about it. However, since I was jobless and with lack of evidence back then, the story never came to light until the floods hit MIAR’s Kajang shelter last month.

Having completely forgotten about the allegations, I went over to the shelter to write on the extent of damage the floods had caused on that fateful day, Dec 20.

The irony on how I stumbled upon the expose was when Puspa herself  – without me asking – revealed that many were against her and the work the NGO was doing. This got me reminded of my mutual friend and sent the alarm bells ringing in my head.

However, when probed on how many dogs died or went missing, Puspa dodged the question and instead remarked that it was insensitive for journalists to ask her this question as she was mourning.

I understood her plight and felt sorry for the animal activist but at the same time, taking a good look around, my Conscience tingled as something felt dodgy (or shall I say, doggy?). Upon getting the figure from one of her volunteer, Puspa relented and said some dogs died and some had run away.

It was only after this particular news report, when I conducted a thorough investigation, I realised that there was a particular Facebook page titled, “Malaysia Independent Animal Rescue (MIAR) – The Truth” (now removed by Facebook for unspecified reasons) where allegations after allegations were made on how the woman had been misappropriating funds from the NGO.

In imploring the page’s administrator, requesting for volunteers and people I can speak to, I was approached by a group of former MIAR volunteers who relayed to me (with evidence) the extent of Puspa’s misconduct which not only led 10 police reports lodged, but also a letter of de-registration by the Registrar of Societies (RoS) (the committee members have appealed for a re-registration as they said the misappropriation of funds was done by one person).

Being a journalist, and understanding that these are allegations until Puspa is found guilty in court, I felt it was only fair to get her side of the story.

I personally felt that the manner and tone she said this appeared threatening. But again, I suppose it could be because she was terribly pissed about the whole thing or perhaps the allegations are true.

On top of that, I also received two phone calls from one Mr Maniam and one Miss Santha.

Maniam, who claimed he is a columnist from The Star, rung me up and said to settle the matter amicably. Imploring me to go have tea with him, he urged me to put the story on hold.

I declined and said I wouldn’t mind the tea (I love tea!) but will only have it when Puspa organises a press conference to explain her self to the public. I feel, since the allegations are already talk of the town among animal lovers and animal activists, with many coming out in the open to reveal the extent of her alleged misconducts, I felt that she should do the same too.

Next, I got a call from Miss Santha who claimed she is Puspa’s sister. She too pleaded the story not to be published and threatened legal action should it be done otherwise.

I found it silly and curious as the story was yet to be published and here are three people (including Puspa) who are trying hard to make sure that the news report is not made public. I am just doing my job as a journalist.

Although I agree that her reputation is on the line, but should it be untrue, the most professional thing to do is to rebuke it in the open. Why give the impression that you’re afraid if you’ve claimed to not have done anything wrong?

The story was published anyway on New Year’s day followed with another report by similar NGOs calling for the RoS to expedite into the claims.

Next, came the issue of Uncle Lee Kong Lai, who was claimed by Puspa to be a dog breeder running a puppy mill. In claiming the raid as illegal by Puspa on Dec 14, the 52-year-old revealed that Puspa approached him using a police report and not a search warrant.

A dog lover, Carol Ng, who had visited the alleged site BEFORE Puspa’s raid said there were no evidence of over breeding as alleged by the famous animal activist.

This led to a plethora of questions swirling in my head to which I tried contacting Puspa for comments. However, there was no response from her side (she has also blocked me on Facebook). She had also said that she would be holding a press conference prior to the stories being released, however, till this date, there are no updates about it. And since she has blocked me on the social network site, I also highly doubt she’ll invite me for the press conference..

Details on Uncle Lee’s side of the story by Ng can be read here.

To top it off, there are also allegations made by donors who claimed that they were not issued receipts. I had interviewed these folks on an animal group on Facebook with some messaging me privately. 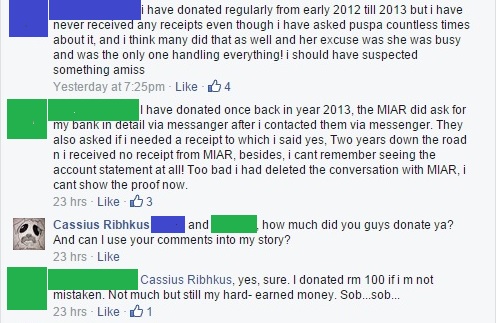 This story ties well with the misappropriation of funds claims BUT again, these are just allegations until it is proven in court.

However, my question is, if you’re not in the wrong, then why remain silent? Why not come out in the open and answer these allegations as not only journalists like me are interested to know the other side of the coin, but also the general public?

Not only does this concern the reputation of Puspa and MIAR, but also ultimately questions the credibility of other similar NGOs which are working really hard for their respective causes.

Puspa has to explain her side of the story to the public. They deserve to know.

Regardless, I feel the real victims are not her former committee members, MIAR or the donors nor even Puspa.

But the rescued dogs.

2 thoughts on “A Doggy Story”